The brainstem and cerebellum are drained by veins that form the following groups: anterior (petrosal), posterior (tentorial), and superior (galenic) [12]. Veins that drain into the superior petrosal sinus form the SPVC, each of them most commonly formed by the following tributaries: transverse pontine veins, veins of the cerebellopontine fissure, pontotrigeminal vein, and the middle cerebellar peduncle [5]. These veins drain the lateral pons and medulla, fourth ventricle and petrosal fissure [11]. The superior petrosal sinus drains the cranial cavity of cerebrospinal fluid and venous blood and empties it into the internal jugular vein, which then flows into the cardiovascular circulation via the superior vena cava [13]. Here, we describe a unique variation of the superior petrosal sinus identified at the time of routine dissection. As to our knowledge, such a case has not previously been reported, the current report would be of archival value. 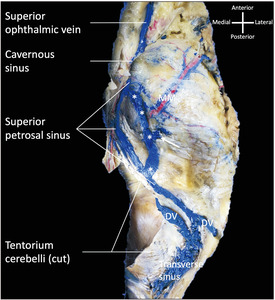 The head of the primary venous plexus splits into three layers: deep, middle, and outer. The basis of the vascular channels of the dura mater is formed by the outer plexus, while the deeper plexus connects with the superficial plexus via intermediate channels. As the meninges develop and grow from the skull base and gradually extend around the neural tube dorsally to the vertex of the head, the intermediate channels are eventually obliterated [4, 6, 10, 14]. The dural venous sinuses develop from the junction of the lateralis and venae capitis medialis and the middle cerebral vein to become the superior petrosal sinus [4]. During human development, it is the last major dural venous sinus to become defined [4] and is evolved from the pro-otic and mesencephalic vein during cerebellar development [13]. The superior petrosal sinus (Fig. 2) emerges at Carnegie stage 2 of development and thus, the variant identified in the present case would occur during this time. The formation of a large suprotic anastomosis appears at Carnegie stage 3, connecting the pro-otic and posterior rhombencephalic veins [15]. This newly formed channel and the terminal segment of the posterior rhombencephalic veins join to form the sigmoid sinus [16]. By Carnegie stage 6, the superior petrosal sinus runs along the otic capsule and inside Meckel’s cave over the trigeminal ganglion [16]. 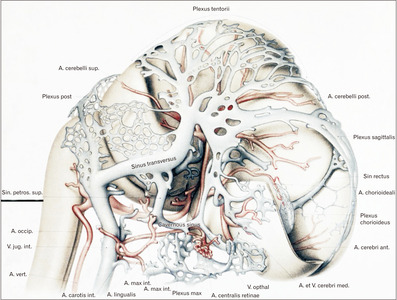 The clinical relevance of the superior petrosal sinus to abnormal connections such as carotid-cavernous fistulas and DAVFs have been noted [13]. DAVFs have been classified into three categories depending on their drainage pattern [13, 15]. Type I drains the dural venous sinuses or meningeal veins in an anterograde fashion. Type II drains into the subarachnoid veins in a retrograde or anterograde fashion. Type III does not have dural venous sinus or meningeal drainage and drains exclusively into the subarachnoid granulations. These drainage types are specific to DAVFs and are not associated with the drainage patterns of the SPVC into the superior petrosal sinus. DAVFs can be treated through either endovascular therapy or surgery; the therapy of choice for all arteriovenous fistula malformation (AVFM) types is transarterial embolization, a type of nonsurgical endovascular therapy. It is rarely a cure, but can make surgery less challenging by decreasing flow through the fistula [15]. Gamma knife radiosurgery is another type of surgery for superior petrosal sinus AVFM, though three years are needed for closure of the fistula and the treatment is not always viable for high-grade AVFMs [13, 28].

However, there are risks with attempting to ligate the superior petrosal sinus. A major risk is blocking flow in the vein of Labbé, which drains the inferior parietal and posterior temporal lobes; this can lead to blood coagulation along the superior petrosal sinus. Moreover, temporal lobe infarction can result, potentially leading to brain herniation and death [32].

A venous phase computerized tomography angiogram or preoperative magnetic resonance (MR) venogram can determine the drainage pattern and location of SPVC entry into the superior petrosal sinus and further indicate which surgical approach can be used to decrease the probability of venous complications [15].

Understanding the variations of the intracranial venous sinuses is important for anatomists and clinicians [33]. Of these sinuses, the superior petrosal sinus is an important landmark requiring consideration in many pathologies and surgical approaches. Clinically, such a variant could result in misinterpretation on imaging studies such as MR venography, potentially be injured during skull base surgery such as tumor removal, or result in a complication during intravenous interventional procedures for treatment of, for example, arteriovenous malformations. Therefore, knowledge of its anatomical variations such as described in the case reported herein can avoid misdiagnosis on imaging and iatrogenic surgical injury.

The authors sincerely thank those who donated their bodies to science so that anatomical research could be performed. Results from such research can potentially increase mankind’s overall knowledge that can then improve patient care. Therefore, these donors and their families deserve our highest gratitude [].