Anatomical variations of the hepatic artery in it’s extra hepatic journey: a cadaveric study with its clinical implications

Vascular anomalies are a serendipitous finding during surgeries and diagnostic angiography. Such variations are frequently encountered in the abdominal region. These anomalies are usually asymptomatic but the presence of hepatic arterial variations may lead to injuries of the liver during surgery. The present study was conducted on 35 adult embalmed cadavers, 31 males, 4 females from August 2015 to December 2021 in the Department of Anatomy, Amrita School of Medicine, Amrita Institute of Medical Sciences, Kochi. In this study of 35 cadavers, we present 3 variants: an accessory right hepatic artery, replaced common hepatic artery, replaced common hepatic artery anastomosis with accessory left hepatic artery and an arc of Buhler. One of our variants has not yielded a precedent in literature search. We have compared these variants with Michels and Hiatt classification. It is known that different variants arise at distinct stages of embryonic development. As specialists in anatomy, we have tried to correlate the variants in our study with their embryological origins.

Vascular anomalies are a serendipitous finding during surgeries and diagnostic angiography. Such variations are frequently encountered in the abdominal region. In the era of transplantations, liver transplants are now common procedure and therefore mapping its vascularity is important to the gastro surgeon. While the hepatic artery provides only 30% of blood flow for the liver, they are important for the vascularity of the bile duct [1].

In this study of 35 cadavers, we present 3 variants (Table 1). We have compared these variants with Michels and Hiatt classification. One of our variants has not yielded a precedent in literature search.

Table 1 . Correlation of hepatic artery variant of the present study with Michels and Hiatt classification

The present study was conducted on 35 adult formalin embalmed cadavers of which 31 were males, 4 were females and belonged to the age group 55 to 80 years. The study was carried out from August 2015 to December 2021 in the Department of Anatomy, Amrita School of Medicine, Amrita Institute of Medical Sciences, Kochi.

These findings were obtained during routine dissection study for first MBBS students and hence no separate institutional ethical committee approval was sought.

The abdomen was dissected following standard procedure described in Cunningham’s Dissection Manual Vol-II. The abdomen was opened. The stomach was identified. The lesser omentum was traced. Its attachments along the lesser curvature and the porta hepatis were defined. All arteries proceeding to the liver were retraced to the parent artery—CT/SMA. A schema was drawn in each case. Variations in origin and course of hepatic arteries as well as its relations with biliary duct were studied and photographs taken. All accessory vessels in this study are prefixed with ‘a’ and all replaced vessels with ‘r.’

Case 1: A male cadaver with aRHA (Fig. 1). The CT measured 3 cm and was directed upwards and to the right, where it trifurcated. The LGA arose from its anterior wall and coursed upwards and to the left. The SA ran upwards for 1 cm and turned at right angles to the left to run a tortuous course towards the spleen. The CHA made a course slightly upwards and to the right and gave off the gastroduodenal artery (GDA) 3 cm from its origin and continued as the HA proper making its entry into porta hepatis, passing through the lesser omentum. The SMA was noted 1 cm below the CT. About 1.5 cm from its origin an artery was observed going towards the right end of the porta hepatis, qualifying as an aRHA as the CHA was present. It was found passing behind the superior mesenteric vein (SMV), the head of pancreas, first part of duodenum and ascends right to portal vein entering the lesser omentum in company with the bile duct and the portal vein. The right free margin of the lesser omentum was greatly increased in thickness due to the presence of aRHA reducing the aperture of the foramen of Winslow, admitting only the tip of the little finger. 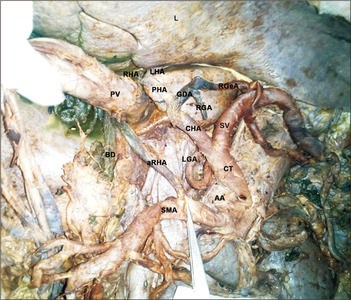 Case 2: A female cadaver with replaced common hepatic artery (rCHA) from SMA (Fig. 2). The CT was noted to be about 2 cm and directed upwards and to the left. It bifurcated into a small artery which was traced along the lesser curvature of the stomach and hence designated as the LGA. The other artery was found to have an initial spiral course in the upward direction and then it turned abruptly to the left side towards the spleen. It had the tortuosity normally stated for a SA. We traced the SMA and found rCHA arising 2 cm from its origin and coursing its way to the porta hepatis. The GDA arose 4 cm from its origin was found running downwards. At the porta hepatis it gave off the right and left hepatic branches, while the main artery took a circuitous course and was traced along the lower part of lesser curvature as right gastric artery (RGA). 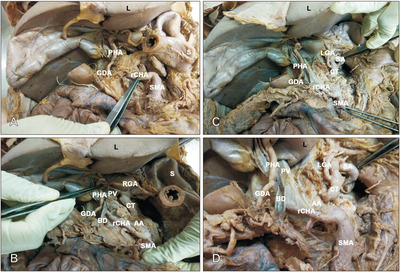 Case 3: A male cadaver with rCHA and aLHA (Fig. 3). The CT bifurcated. The artery that was positioned upwards and to the left was traced along the lesser curvature of the stomach and was therefore designated as the LGA. An artery arising from the LGA was seen coursing towards porta hepatis. The SA was identified as a tortuous vessel travelling to the left side. Both these vessels had smaller caliber than normal. The SMA was identified; 1 cm from its origin two arteries were seen from its right and left walls below the lower border of pancreas, the left being larger than the right, both merged to form the rCHA at the level of middle of head of pancreas anteriorly. The right and left divisions formed a loop around the SMV before its merger, with the left division of the aberrant rCHA lying anteriorly and the right division of the aberrant rCHA lying posterior to it. After the merger, the rCHA proceeded upwards along with bile duct and portal vein towards the right end of porta hepatis which then branched into RHA and LHA. Therefore, the artery from the LGA lying in the left part of porta hepatis qualifies to be aLHA. This artery met the rCHA forming a loop within porta hepatis. 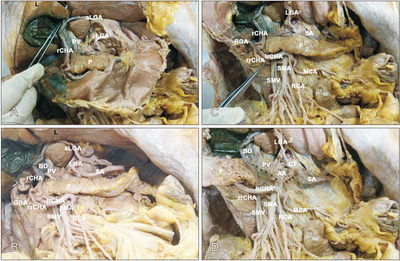 Variations of arteries irrigating solid and hollow viscera of the abdomen, especially the liver have been highlighted by anatomists and radiologists alike due to their significance in surgeries involving viscerae [5-7]. The anatomy and variations of hepatic artery have been described by several authors like Von Haller [2] in 1756, Tiedemann [8] in 1822, Flint [9] in 1923, Adachi [10] in 1928, and Michels [11] in 1955. While Hallers work was exclusive to the celiac trunk, Tiedemann’s work was unrestricted to multiple vascular anomalies of human body. Both Adachi and Michel studied hepatic artery and arrived at various subgroups based on the origin of the vessels. Flint in his seminal work on arterial anomalies of the right hepatic, cystic and GDA included their relation to the bile duct.

Various literature records set the prevalence of anatomical variants in the range of 20% to 50% [12, 13]. It is known that different variants arise at distinct stages of embryonic development.

The CHA in adults is intermediate in size between LGA and SA, although in the foetus and early postnatal life it is the largest branch of the CT. After arising from CT, it passes anteriorly and laterally behind epiploic foramen beyond the origin of GDA it is termed hepatic artery. At the porta hepatis, it divides into right and left branches [14]. This classical description was seen in 32 (91.43%) of the cases in the present study. Michel and Hiatt studies which are the gold index of hepatic artery variants reported classical description of 55.61% and 75%–77% respectively [3, 4].

The higher percentage in the present study can be reasoned to be definitely due to the smaller sample size and questionably due to ethinicity. Other Indian studies also report higher numbers of normal pattern than in Caucasian studies [15].

The course of the 3 variants can be embryologically correlated to either persistence of a foetal variant or disappearance of a vessel that should have persisted. The type VII, VIII, IX, and X of the Michel classification and its equivalent in the Hiatt classification have been rarely described in literature, while many cases of RHA arising from SMA has been documented.

In case 2 variant of the present study, we observed the rCHA to be arising from the SMA. At the porta hepatis it gave off the right and left hepatic branches, while the main artery took a circuitous course and was traced along the lower part of lesser curvature as RGA. Upto the point in the porta hepatis this artery has semblance to type IX of Michel classification and type V of Hiatt classification but the presence of RGA will not essentially allow it to fall into the stated subtypes. Some authors have referred this variant as hepatomesenteric trunk [6, 25, 26]. This extended pattern has not been mentioned in any study in our literature search.

Ha et al. [33] in their study observed that the rCHA does not penetrate the pancreatic parenchyma and crosses the dorsal aspect of portal vein and SMV. In the present study the rCHA is retro pancreatic but lies ventral to portal vein.

In case 3 variant of our study, rCHA a branch of SMA, anastomosis with aLHA derived from LGA. This rCHA branch of SMA giving off GDA and RHA and LHA at its termination along with an aLHA from the LGA therefore is a new subset hitherto unmentioned in any classification of the hepatic artery. aLHA from the LGA was reported by various authors [2, 17-19, 34] .

The course of HA in case 2 and case 3 do not fall into category of any classification to the best of our knowledge (Table 1).

During foetal life the dorsal aorta and ventral aorta are anastamosed by several vitelline arteries of significance. The vitelline arteries, 10, 11, 12 form the CT with the disappearance of the ventral anastomotic segment and then give rise to LGA, CHA, and SA. The 13th gives rise to SMA and in the process the anastomotic segment between it and 12th disappears and that is how the coeliac and SMA become 2 entities [35].

In case 1: 10, 11, 12 vitelline arteries have developed normally and develop as the normal offshoots of coeliac axis. From the 13th vitelline artery, the foetal RHA persists therefore there is normal development of CHA with an accessory RHA. 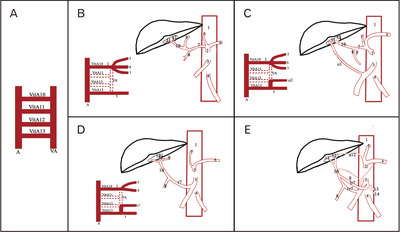 The CT and its branches are significant in surgeries such as gastric resection, partial hepatectomy, operations performed near the gastro hepatic ligament, including esophagogastrectomy, gastric bypass, and anti-reflux procedures. Therefore, the knowledge of the existence of either accessory or replaced is important as they may be potential bleeding sites, or even the only source of vascularity.