As a technique mainly hiring in forensic investigation field to identify the descents, craniofacial reconstruction (CFR) is also used in archaeology to create the faces from ancient or medieval human remains, when there is little information about his/her appearance. Eung-Cheok Ko (1531–1605) was a writer and scholar in the mid Joseon period. In January of 2019, His mummified body was found at Gumi, Kyeonsangbuk-do, Korea. The remains were anthropologically examined, and archaeological CFR was also requested for this case. This report reveals the case’s facial reconstruction process and his portrait that is drawn based on the 3-dimensional CFR result.

Craniofacial reconstruction (CFR), a technique to rebuild the ante-mortem facial appearance of the individual, is employed in that very few scientific evidences are remaining to aid the identification of missing people’s remains [1, 2]. CFR becomes also very significant in archaeology of Korea. In brief, during Joseon dynasty period (1392–1897 CE), the facial appearance of respectful officials or scholars were plentifully drawn by contemporary painters. However, as for Korean mummies of Joseon period, there were many cases without any portraits or sculptures remained. When museum curators hoped to get mummified figures’ portrait for public occasions, little information could be available. In that case, portrait drawings must rely on simple imagination or vague reference materials. To overcome this shortcoming, the facial appearance of mummies can be re-created by CFR and the result becomes an ideal reference for drawing authentic portraits of them [3-5]. This idea has been very meaningful in mummy study; however, we admit that it is nothing short of just begun. Actually, authentic achievement cannot be obtained if more experience for drawing mummified people’s portraits based on CFR is not accumulated properly.

Recently, we had a chance to make a CFR-based portrait of Joseon period celebrity who was mummified inside the grave and recently discovered by archaeologists. In January 2019, the grave of Eung-Cheok Ko (1531–1605) was archaeologically investigated at Gumi City (Gyeongsangbuk-do, Korea). He was a famous writer and scholar of the Joseon Dynasty, having passed civil service examination in 1561, and then served as governor of Hoedeok county and Gyeongju city. In his grave, many clothes, cotton blankets, and pillows could be also found in a well-preserved state. The mummy was moved to Seoul National University College of Medicine. Computed tomography (CT) scan was performed with the cooperation of Dankook University Hospital (Cheonan, Korea). While removing the shrouds surrounding the mummy in the lab, the work was suspended due to concerns from descendants who feared damage to their ancestor’s body (Appendix 1). Although the mummy’s face was not exposed to us, the possibility of predicting his face based on the skull recovered from the CT data remains.

Repositioning of the skull

Table 1 . The mummy skull indexes and their features

Application of the facial skin thickness and facial muscles

Tissue depth pegs (stick markers) were installed to reflect thickness of skin at different locations (n=31) of the skull based on the average skin thickness data of Korean population (Fig. 1) [8]. The fifteen major facial muscles were applied to the skull by their origins and insertions [9], giving an approximate outline of mummy’s face (Fig. 1).

The positions of the eyeballs were predicted using the proportion of the height or breadth of eye orbits. In short, 57.6% of the orbit breadth from the medial point (dacryon) is the center of eyeball in horizontal and 44.1% of the orbit height from the superior point (supraconchion) is the center of eyeball in vertical. 51.3% of orbit height from the deepest point of lateral orbit margin is the most anterior point of the eyeball in lateral. Orbit breadth was measured as between dacryon (medial point) and ectoconchion (lateral point) and orbit height was measured as between supraconchion (superior point) and orbitale (inferior point) (Fig. 2) [10]. The slopes of the eyes in the front view were determined by predicting the combined attachment positions of the medial and lateral palpebral ligaments to the orbits (Fig. 2).

Figure 3. Eyebrow position on the skull and face.

The lip thickness was predicted using the position of the upper and lower incisors [1]. For the width of the lip, several methods were tested using blended of interlimbus distances, the interpupillary distance and the plane method creating planes by both upper canines to find better expression and fit to the skull (Fig. 5). 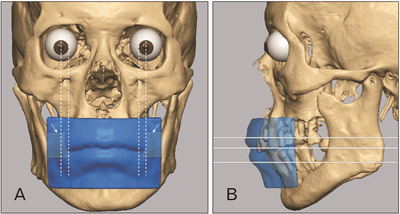 Skin layer was added to the face based on the tissue depth pegs on the skull. After combining the skin layer with each facial components (eyebrows, eyes, nose, lips, and ears), the detailed shape of the face was developed. Skin wrinkles were applied to complete the CFR of the mummy (Fig. 6, Appendix 4).

Figure 6. The final facial reconstruction of the mummy in panorama view. Front and oblique view in large size is also available in Appendix 4.

To add skin texture, skin color, hair, and costume, clay sculpture was transferred to 3D digital software ZBrush (PixologicTM, Los Angeles, CA, USA). The model was painted by Adobe Photoshop (Adobe, San Jose, CA, USA) as in referring Joseon period panting style [13]. For the dress and ornaments in portrait, information on the relevant remains was provided by textile specialists. Eung-Cheok Ko was not wearing the cap or hat inside the grave. However, as the gentry of Joseon dynasty period, we decided to make him wear a common cap in the portrait. The final portrait of Eung-Cheok Ko was drawn in traditional painting style (Fig. 7). 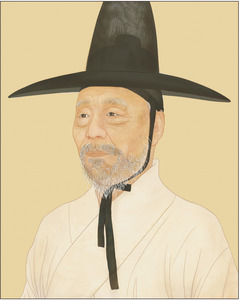 Figure 7. Portrait of the mummy in Joseon era style.

It is of great significance in that creating reliable portraits of historically famous figures can be possible by CFR. In this report, we took a scientifically restored face shape with age and gender into account; and portrait drawing was finally carried out by an artist, referring to the latest historical research updates on Joseon period clothing. In our work, the facial appearance should reflect the fact that Eung-Cheok Ko survived to the age of 74 years. His ears and skin were expressed droopier as they got older, wrinkles were depicted around the eyes, and the age range of this person was expressed with eyebrows and whiskers that looked like a little thin. And we also reflected in the portrait that he was a prominent scholar and a celebrity respected by the people at the time. A headband of Eung-Cheok Ko in the portrait is expressed in a decent arrangement. The top he was wearing was depicted reflecting the style of the man’s coat worn by the scholars at the time. The hat Eung-Cheok Ko wore on his head was drawn by referring to the portrait of Kim Jin (1500–1580) and the existing hat of Seong-ryong Yu (1542–1607). According to the historical literatures, he was a great scholar who studied diligently in his hometown and received considerable respect from people at that time [14]. Therefore, we tried to reflect his admirable personality in historical records when we painted the portrait. In South Korea, since CFR becomes an ideal technique to make historical figures’ portraits or statues more reliable [5, 15], our report can be accepted as a part of continuing efforts to accumulate academic experience indispensable in this task.

The authors in this study are deeply grateful to the generous and courageous decision of the Andong Ko clan. They provided us with the opportunity to examine their respectful ancestor. Joon Yeol Ryu, Yeon Kyung Park, and Won Joon Lee were supported by a grant from National Forensic Service (NFS2020MED01), Ministry of the Interior and Safety, Republic of Korea. This work was supported by the National Research Foundation of Korea (NRF) grant funded by the Korea government (MSIT) (No. 2020R1A2C1010708) and Ministry of Education of Korea (2020R1I1A1A01073501).