Morphometric characteristics of the aorta and heart in situs inversus totalis

Situs inversus totalis is a rare condition of visceral transposition in thoracic and abdominal cavities. Computed tomography (CT)-based morphometric analysis of the cardiovascular system prior to the surgery helps to describe vessel topography and size, choose the right surgical insertion site, avoid vessel trauma, and prevent hemorrhage during surgical intervention. We present a case report of situs inversus totalis detected incidentally in a 74-year-old male with the acute abdominal syndrome. Appropriate detailed aorta measurements are used to choose an adequate size of the aortic prosthesis during open surgical repair or endovascular aneurysm repair. An accurate assessment of the vessels on CT scans assists in consideration of the catheter diameter and the most reliable cannulation site. Vessel size correlates with morphological conditions (kinking, stenosis, occlusion), which may be considered a risk of organ malperfusion. The anatomical analysis prior to surgery in different anatomical variations may ensure patient safety and predict complications.

Examination of patients with situs inversus totalis is a challenge for doctors, especially if the patient has already experienced urgent thoracic or abdominal pathology [6, 7]. Acute abdominal pain is one of the most common conditions in the emergency department [7]. Typical lower right-side appendicitis pain in situs inversus totalis will be on the left. In patients with situs inversus totalis pain in the right upper quadrant rather than considered a pathology of the hepatobiliary system will be seen as a splenic disorder. A ruptured abdominal aortic aneurysm will be mirrored on the right of the inferior vena cava and a life-threatening condition may not be recognized on time. Pain in reversed visceral may distract clinicians, mimic typical conditions and cause a delay in the diagnostic and treatment process.

Anomalies hamper clinical decision-making and surgical procedures. Reliable diagnostic tools should be used to make an accurate diagnosis promptly. Computed tomography (CT) is considered a quick imaging test, which allows clear visualization of the anatomy of structures studied for pre-surgical planning and safe surgery. A CT-based morphometric analysis of the cardiovascular system helps to describe vessel topography and size. Proper planning prior to the surgery allows to choose the right surgical insertion site [5], avoid vessel trauma and prevent hemorrhage during the surgical intervention [8].

The study was performed following the Declaration of Helsinki and was approved by the Bioethical Committee of Danylo Halytsky Lviv National Medical University (Lviv, Ukraine). 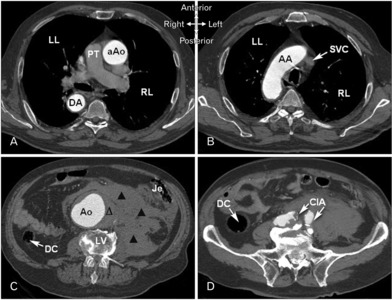 Figure 1. Serial two-dimensional axial views showing slices of the aorta. (A) The series demonstrates the location of the ascending aorta (aAo) to the right of the pulmonary trunk (PT). The aAo is located to the left of the vertebral column; the descending aorta (DA) is located to the right of the vertebral column. (B) The aortic arch (AA) is to the right of the superior vena cava (SVC). (C) Computed tomography image of the abdomen under the renal arteries level. Abdominal aortic aneurysm (Ao) located in the center with intravascular thrombus on the left (∆) with dissection and retroperitoneal hematoma (▲); lumbar vertebra (LV); right-sidedness of the jejunum (Je); right-sidedness of the DC. (D) Common iliac artery (CIA) with saccular partially thrombosed aneurysm right-sidedness DC. DC, descending colon; RL, right lung; LL, left lung. 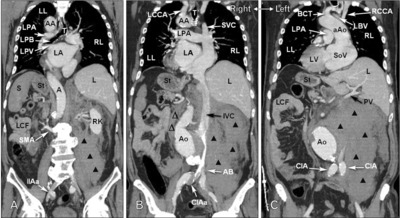 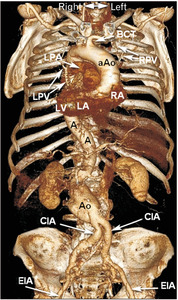 CT scans of the abdomen (Figs. 2, 3). The abdominal aortic diameter on the level of: celiac trunk branching, 29 mm; superior mesenteric artery branching, 29 mm; renal artery branching, 28.5 mm (renal arteries branch off practically at the same level as the superior mesenteric artery); 24 mm below the left renal artery ostium there is a kinking of the abdominal aorta with deviation to the right, from which starts a spindle-shaped abdominal aortic aneurysm sized 71 mm×77 mm×90 mm (with parietal thrombus and signs of rupture and retroperitoneal hematoma in the anterior and posterior pararenal spaces on the left, partly in the left perirenal space and anterior pararenal space to the right, without signs of contrast media extravasation). Branches of the inferior mesenteric artery are not clearly visualized due to aneurysm rupture. Abdominal aortic diameter above the bifurcation is 29 mm. The iliac artery diameters on the right side: common iliac artery, 20 mm (in the middle third with partially thrombosed saccular aneurysm with a diameter of 30 mm); external iliac artery, 13 mm; internal iliac artery, 14 mm (in proximal part with partially thrombosed saccular aneurysm with a diameter of 23 mm). The iliac artery diameters on the left side: common iliac artery, 19 mm; external iliac artery, 16 mm; the internal iliac artery, 16.5 mm. The inferior vena cava is located left of the spine, compressed with an aneurysm—venous return is obstructed. The renal vein, which branches off the inferior vena cava and runs to the right-side kidney, is retroaortic and compressed between the abdominal aortic aneurysm and the spine (posterior nutcracker syndrome).

Situs inversus is considered an autosomal recessive genetic condition [2, 3]. Laterality develops during the very early stages of prenatal development. During gastrulation, the primitive streak (starting from the 14th day of prenatal development) and the notochord (end of the third week of prenatal development) are formed. Primitive streak and notochord are responsible for the establishment of the embryonic axis and left-right symmetry. The primitive node plays a key role in the formation of body axes. Responsible for the asymmetrical body structure are transforming growth factor-β proteins—Nodal and LEFTY-2, homeobox-containing transcription factor proteins PITX2, particular groups of cells in the primitive node of the embryonic disc, and many others [9, 10]. Disruptions in the cascade of processes result in “mirrored” location of thoracic and abdominal organs. Situs inversus totalis has no phenotypic manifestation [8]. As a result, situs inversus totalis is often discovered unexpectedly, hampering diagnostics and anatomical description of viscera, blood supply, and venous drainage in particular.

Case reports of situs inversus totalis often include topographic characteristics [3, 4]. In the presented case, we paid close attention to the rotated heart with a description of the heart chambers; the position of the aortic arch turning dorsally and to the right; the brachiocephalic trunk passing behind the left sternoclavicular joint with the untypical supply of the left upper extremity, the left side of the neck and the head. Unlike the topographic anatomical peculiarities, the morphometric analysis of the cardiovascular system in situs inversus totalis is not widely presented.

Morphometric characteristics have valuable meaning in a clinical situation. Firstly, appropriate detailed measurements of the aorta are used to choose an adequate size of the aortic prosthesis during open surgical repair (linear prosthesis of the abdominal aorta) or endovascular aneurysm repair (EVAR) [8]. Secondly, an accurate assessment of the vessels on CT scans assists in the consideration of the most reliable cannulation site and cannula diameter. Thirdly, vessel size correlates with morphological conditions, such as kinking, stenosis, occlusion, which must be considered a potential risk of organ malperfusion. Finally, anatomical analysis prior to surgery may ensure patient safety and predict complications. It supports the thesis that morphometric characteristics play an important complementary role in ensuring optimal clinical decisions.

Because of the impact on clinical practice, assessment of the aorta based on the CT allowed us to measure the diameter of all parts of the aorta. According to the European Society of Cardiology Guidelines, in healthy men, the upper limit of the aortic diameter should not exceed 40 mm with 0.9 mm expansion for every 10 years [9]. In the reported case, the proximal and distal ascending aorta were 44 mm. Sizes of the branches of the aortic arch show no significant difference compared to those under normal conditions. Analysis of the CT scans of the abdomen showed abdominal aortic diameter at the level of unpaired visceral branching in the ranges defined as normal for the general population. The abnormal kinking of the abdominal aorta below the left renal artery ostium with deviation to the right and aneurysm formation changed the morphometric characteristics of the aorta. The transverse aortic diameter was measured to be three times higher (90 mm) than the norm (30 mm) [11]. Typically, the infrarenal location of an aortic aneurysm is reported to be the most common [12, 13].

Dissection of the infrarenal aortic aneurysm is typically accompanied by abdominal pain. Acute pain syndrome is an emergency condition that requires swift diagnostics and determining the treatment tactics [6, 7]. CT was considered a method of choice [9]. Due to adequate visualization of anatomical structures, we were able to identify the mirrored location of internal organs and an infrarenal aortic rupture. Timely adequate assessment of abdominal CT scans helped conduct a safe surgical intervention—linear prosthesis of the abdominal aorta.

In conclusions, situs inversus totalis is a rare condition, which bears some challenges for clinicians. The detailed anatomy of the cardiovascular system in different anatomical variations is the key aspect of preventing surgical complications during surgery for patient with situs inversus totalis.

The study is funded as a part of the planned research work of the Department of Normal Anatomy, state registration No. 0120U002129.