Bilateral absence of subclavius muscles with thickened costocoracoid ligaments: a case report with the clinical-anatomical correlation

Anatomical variation is defined as normal flexibility in the topography and morphology of body structures. Such variations are not uncommon in muscles, particularly in the upper limb. Subclavius muscle (SM) has a proximal attachment to the first costochondral junction and the muscle fibers are then directed upwards and laterally to get attached distally to the subclavian groove of the clavicle. Having similar attachments as the subclavius, the costocoracoid ligament (CCL) is the thickening of the proximal part of clavipectoral fascia extending up to the coracoid process. Both SM and CCL help in the maintenance of smooth movements of the pectoral girdle and both may not always be present. Absent SM may be due to anomalous development from the muscle matrix that also forms the inferior belly of the omohyoid apart from the SMs. This anatomical variation may be associated with thickened CCLs and can be correlated to the smooth functioning of the pectoral girdle.

Variant anatomy, an anatomical science, deals with human body abnormalities based on decades of anatomical experience. Many morphological variations do not usually affect the normal function of the human body but may affect the body rarely [1]. These anatomical variations range from the most common type to the least and need to be documented for future reference. Knowledge of anatomical variations influences the predisposition to diseases, symptomatology, clinical examination, diagnostic, and patient management [2]. One such variation is the absence of subclavius muscles (SM) and thickened costocoracoid ligaments (CCL), which are uncommon and very often unilateral [3].

SM is a triangular muscle belly tucked between the first rib and clavicle. It originates from the first costochondral junction to be inserted into the subclavian groove on the undersurface of the clavicle. The deep fascia in this plane is the clavipectoral fascia which encloses the SM entirely and blends with the periosteum of the clavicle. Down from the SM is the extension of the clavipectoral fascia to the upper border of the pectoralis minor. This fascia thickens horizontally between the two bony attachments, namely the coracoid process and the first costochondral junction as the CCL. Both SM and CCL help in smooth movements of the bones of the pectoral girdle [4-6].

The SM has an accessory muscle the subclavius posticus, originating from the medial side of the first rib and extending up to the superior margin of the scapula. This aberrant muscle compresses the cords of the brachial plexus hence contributing to thoracic outlet syndrome (TOO) [7]. TOO due to subclavius posticus muscle is associated with carpal tunnel syndrome [8]. The CCL, a modification of clavipectoral fascia helps to maintain the stability of the sternoclavicular joint and hence gets thickened due to the absence of SM. The lateral cord of the brachial plexus is closely positioned under the CCL and therefore gets compressed if the CCL is thickened [9]. The short CCL may bring about some fixation of the scapula, resulting in the cosmetic deformity of the shoulder and associated with limited movements of the scapula [10].

In the present case, we had documented bilateral anatomical variations in the SM and CCL.

During routine educational dissection of a male cadaver of 65 years of age, at the Department of Anatomy, All India Institute of Medical Sciences, New Delhi, a rare bilateral variation in the pectoral region was observed. Skin and subcutaneous tissues were dissected to identify the pectoralis major muscle. The muscle was transected close to the origin and reflected laterally towards its insertion on the humerus, to expose the underlying pectoralis minor and clavipectoral fascia. This was followed by the deep dissection extending up to the undersurface of the clavicle. During this step of the dissection, the absence of SMs bilaterally was noted. It was observed bilaterally that no accessory muscles were supplementing the absent SMs. Also, noted bilaterally was the association with the thickened CCL. The extent of the ligament from the costochondral junction to the coracoid process was observed bilaterally (Figs. 1, 2). These ligaments were very strong, unyielding to cuts and pressure applied by the forceps during the demonstration. The coracoclavicular ligaments were also observed and appeared normal in morphology. 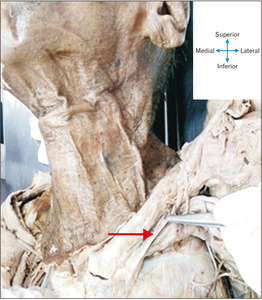 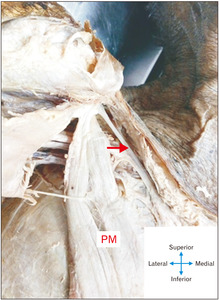 As per available literature, so far there are no reports on the presence of bilateral thickened CCL with the absence of SMs, which makes it an extremely rare anatomical variation.

Some CCL are genetically short showing autosomal inheritance. Due to fixation of the scapula to the first rib, cosmetic deformity with rounding of the shoulders and loss of the anterior clavicular contour. Movements of the scapula especially rotation and retraction were restricted, without hampering normal activities. Sometimes ossified short CCL is present which can be surgically excised [10].

Muscles associated with the clavicle show several anatomical variations as per literature. One of the muscles associated with the clavicle is the subclavius [11]. SM originates from the first costochondral junction, extends superiorly and laterally to the subclavian groove on the inferior surface of the clavicle. This muscle stabilizes the sternoclavicular joint [4-6]. Mastectomy causes hypertrophy of the subclavius and atrophy of pectoral muscles in females [12]. The recent trend of SMs variations pertaining to its accessory muscle formation [13] or absence [3] or muscle replaced by ligaments [14] etc. has been increasing.

The costoclavicular space is bounded anteriorly by the clavicle, SM, and the CCL. The posterior boundary is formed by the first rib, insertion of scalene muscles, and upper border of the scapula. Trauma, congenital disorders, anomalous muscles or tendons, and poor posture can reduce this space and constitute TOO. The symptoms can be aggravated during shoulder abduction due to downward movement of the scapula and coracoid process which can press the brachial plexus. The subclavian vein can be compressed by the CCL, the SM and tendon, the scalenus anticus muscle, and the angle of the first rib and clavicle. Subclavian occlusion syndrome requires resection of a part of the SM, division of the costocorocaid ligament, or anterior scalene muscle attachment to the first rib [4, 10].

In the present study, we had observed the thickened CCL with bilaterally absent SMs. So, in the functional absence of the SM, the stability of the sternoclavicular joint might have been taken over by the thickened CCL bilaterally. There was no shortness of CCL on both sides as documented previously [15]. Accessory or variant muscles like subclavius posticus and pectoralis minimus were not associated in the region of SM that bypasses the chances of TOO and compression of the cephalic vein [16, 17]. The other pectoral girdle muscles were normal even with the absence of SMs.

During embryological development, there is a single mesodermal matrix for the development of the inferior belly of omohyoid, SM, and occasionally for the subclavius posticus muscle [3]. The possible explanation in our case is that the same single matrix developed into the inferior belly of the omohyoid alone but not the SM and subclavius posticus. Regarding the development of shoulder girdle, clavicle and coracoid process are connected by a cartilaginous procoracoid process that later transforms into a fibrous structure-the CCL. The CCL can get ossified or thickened due to trauma [15]. In the present case, there is no history of any trauma as per the evidence gathered from the relatives of the deceased. Thus, the conclusion is that the thickening of CCLs might be a compensatory mechanism to increase the stability of the sternoclavicular joints due to the absence of SMs. The primary reason for the absence of SM might be due to its failure to develop from the matrix which differentiates only into the inferior belly of the omohyoid. This further leads to thickened CCL for the stability of the sternoclavicular joint [15].

As anatomy explains physiology and vice versa, the thickening of the CCL in the absence of the SM bilaterally can be correlated with the smooth functioning of the pectoral girdles. Knowledge of anatomical variations is thus important for clinicians planning surgical intervention, occupational physiotherapists, and also during radiological imaging.