The root canal morphology of the mandibular second molars in many cases is double roots consisting of a mesial and distal root, though some have one or greater than two roots. In cases with C-shaped root, a gutter-shaped root (GSR), a fused root on the buccal side, is often encountered. For studies of root morphology and internal anatomical structures of teeth, extracted teeth have been used [1-7], as well as transparent root canal models [1-5] and molding samples [6] when examining the number of root canals. Recently, dental cone-beam computed tomography (CBCT) has come to be frequently used in clinical settings to determine the number of root canals as well as morphology, with several reports of morphologic observation findings of hard tissues using CBCT presented [8-17].

There are also various reports related to number of roots. Teeth with a single root were found in 5%–6% of examined cases [1, 4, 5], while those with double roots were found in 75.8% to 94%, and with three roots were found in 1.2% to 9% [1-3, 5]. Additionally, development of a GSR was reported to be seen in a wide range from 3% to 39.2% [1, 2, 7, 11, 18], with ethnic variations also shown. One report found that teeth with a GSR were more frequent in females [18], indicating a possible sex difference. Also, studies of development of a supernumerary root on the lingual side of mandibular molars have been presented [19, 20], while root morphology has been speculated to be related to plaque accumulation [21]. As for the root canal morphology of GSR cases, examinations based on the classification of Fan et al. [22] have been conducted.

In the present study, CBCT images were examined to determine the root morphology of mandibular second molars in Japanese and development of a GSR, as well as to classify root canal morphology in GSR cases.

Sliced images at one-third of the root apex were made by reconstructing images vertical to the tooth axis using the imaging software package (One Volume Viewer; MORITA) (Fig. 1). Root morphology assessments were done with the sliced images. 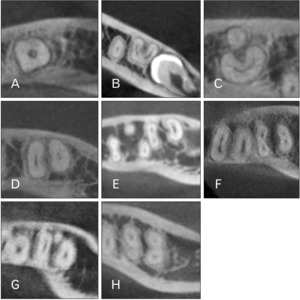 Observations of root morphology included determination of number of roots and calculation of the ratio of fused roots related to root thickness of GSR cases. Using the public domain software package ImageJ [23], measurements of the length of the fused site and root thickness on the line through the most protruded point or most recessed point on the buccal side of the fused site, which connects at a right angle to the line between the most protruded points on the lingual sides of the mesial and distal roots, were made, with the results presented as percentage (Fig. 2). 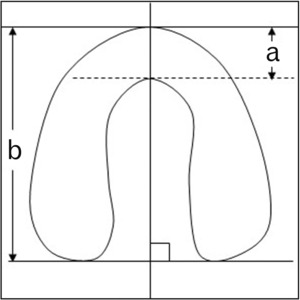 For root canal morphology observations of GSR cases, binarized images were created with ImageJ. The range of the mandibular second molar root canal was selected in each sliced image and binarization was performed based on the image data within the root (Fig. 3). The number of root canals was determined using the binarized images and classified into six types, using the Melton classification modified by Fan et al. (Fig. 4), as follows [22]: 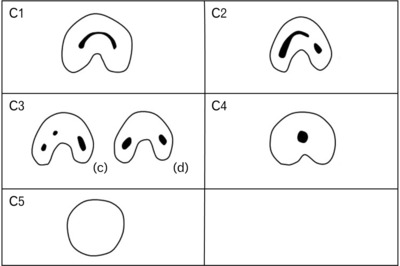 The ratio of the fused site to root thickness in GSR cases was compared between sexs using a -test.

The present study protocol was approved by the Ethics Committee of Ohu University (No. 234).

Another study found a difference between sexs for development of a GSR, with cases of a fused mesial root and distal root more prevalent in females [18]. In the present observation study, prevalence was also higher in females (39 of 84; 46.4%) as compared to males (22 of 89; 24.7%). Another report noted that the crown diameters and crown areas of the mandibular molar was significantly greater in males [24]. In females, the distance between the roots is generally shorter, thus more easily leading to fusion and development of a GSR. Kato et al. [21] reported that teeth extracted due to periodontal disease showed a higher ratio of fused roots. In the present findings, there was no significant difference for ratio of the fused site to root thickness at the one-third of the root apex between sexs.

Zare Jahromi et al. [1] reported that roots with a conical outer shape tended to show a simple root morphology, while those with a wider shape often had a more complex morphology. However, precise root canal morphology details cannot be obtained with the methods employed in that study. According to the guidelines regarding use of imaging for endodontics issued by the American Association of Endodontics (AAE) and the American Academy of Oral and Maxillofacial Radiology (AAOMR), CBCT is a helpful tool for diagnosis of complex or irregular root canal morphology at the time of pulp extirpation [25]. Therefore, appropriate use of CBCT imaging including a lower exposure dose along with proper the field of view (FOV) settings is considered to be helpful for determining root canal morphology.

CBCT provides grayscale images without a CT value, thus various methods have been reported for measurement, including single rater observation [12], confirmation of reliability of obtained data with a κ-test after repeated measurements [13, 14], and obtaining consensus from several different raters [15, 16]. Another report showed that deviation between raters can be avoided by using an image processing method for evaluation of grayscale images [26]. In the present study, ImageJ [23] was used for determining root canal morphology details by binarization after selecting the root outline of CBCT sliced images.

A supernumerary root of the mandibular molar on the lingual side was termed “radix entomolaris” [19, 20], while that on the buccal side is known as “radix paramolaris.” Radix entomolaris is considered to be a cause for plaque accumulation like that seen with a GSR [21] and also reported to be a characteristic of Asian patients [20]. Song et al. [8] found that 0.4% of GSR cases had a root on the distal lingual side and a study conducted in Indian noted that 13.3% had radix entomolaris in the mandibular first molars [21]. In the present study of mandibular second molar morphology, there was only one case (0.6%) with a supernumerary root on the lingual side of the GSR.