*These authors contributed equally to this work.

Frontal sinuses are paired irregular pneumatic cavities located between the outer and inner tables of the frontal bone, posterior to the superciliary arches [1]. Frontal sinus development begins around the fourth or fifth week of gestation, and continues during the intrauterine and postnatal periods through puberty or even early adulthood [2]. The length, height, and width of the frontal sinuses increase continuously until 20 years of age, after which their size and shape are maintained except when disease or aging occur [3].

The frontal sinuses have been frequently studied using plain-film radiography as a screening method [4]. Although this technique is widely used, computed tomography (CT) plays an important role in evaluating diseases and detecting anatomical variations of the frontal sinus, and may gradually replace conventional radiographs [5]. The main advantage of CT over plain radiography is the absence of overlapping structures, allowing clear, three-dimensional (3D) visualizations of anatomical structures [6]. CT has also become an essential tool for planning frontal sinus surgeries and for navigation during functional endoscopic sinus surgery [7].

Therefore, the purpose of this study was to use 3D reconstruction analysis to investigate the frontal sinuses and determine differences in its linear and volumetric measurements between age groups, nose sides, and sexes in adults.

Facial CT scans were selected retrospectively from patients hospitalized in the Department of Plastic and Reconstructive Surgery at the Konkuk University Chungju Hospital. Facial CTs of 349 subjects were selected, with an age range of 21 to 80 years in order to exclude developing bones. Of these 349 subjects, 68 were excluded due to frontal sinus fracture, surgery, or agenesis. The final sample therefore included 281 subjects, comprising 173 males and 108 females. The sample population was divided into two age groups: young adults aged 21 to 40 years, and old adults aged 41 to 80 years. 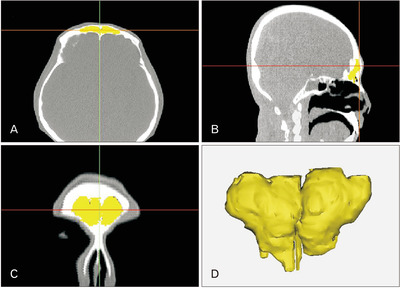 Three perpendicular reference planes (midsagittal, coronal, and Frankfort) were drawn on each rendered 3D file using 3-matic software (version 12.0; Materialise). The Frankfort plane is defined as the plane passing through three points: the left orbitale and both porion points. The orbitale is the lowest point of the lower margin of the orbit, and the right and left porions are the uppermost points of the roof of each external acoustic opening. The width (midsagittal plane), anteroposterior length (coronal plane), and height (Frankfort plane) of the frontal sinuses were measured using the planes as reference (Fig. 2). Widths of the left and right frontal sinuses were measured independently as the longest horizontal distance from the midsagittal plane (Fig. 1A). The total width of the frontal sinus was obtained by the sum of the widths of the two sides. The anteroposterior length of the frontal sinus was measured on the coronal plane as the distance between the most-anterior and most-posterior points from the center of the glabella (Fig. 1B). The anteroposterior lengths of the left and right sides were measured both independently and together to obtain the total length. Height was measured on the Frankfort plane as the vertical distance between the lowest and highest points (Fig. 1C). Height was measured both independently between the left and right sides and as a total height, measured from the lowest to the highest point on either side. Segmented frontal sinus volumes were calculated automatically using 3-matic software (Fig. 1D).

This study was conducted after approval for data collection was obtained from the Ethics Committee of Konkuk University Chungju Hospital (approval IRB no. KUCH 2020-12-037) and was performed in accordance with the principles of the Declaration of Helsinki.

This study was conducted in accordance with relevant guidelines and regulations.

Facial CTs of 281 adults aged between 21 and 80 years (mean age of 38.3-year-old) were analyzed. Table 1 lists the width, height, length, and volume of the frontal sinuses by side, sex, and age group.

Table 1 . Results of width, length, height and volume of frontal sinuses and comparison of sides and age groups in each sex

The mean frontal sinus volumes in males were 10.2 and 7.0 cm3 in the young and old adult groups, respectively (<0.05). In females, there was no statistically significant difference in mean volume between age groups (>0.05).

All of the linear and volumetric measurements are compared between the sexes are listed in Table 2. All dimensions except for the total height of the frontal sinus were significantly larger in males than in females regardless of age group (<0.05). Sex differences were more predominant in young adults (Table 2).

Table 3 . Side difference of frontal sinus regardless of age groups

Various previous studies have obtained anatomical measurements of the width, height, and anteroposterior length of the frontal sinus using plain radiographs and two-dimensional CT [13-15]. Many environmental and genetic factors have been demonstrated to influence the morphology of the frontal sinus between different populations [16]. Kirk et al. [15] measured the frontal sinus on 39 adult radiographs in Canada and reported a mean total width and height of 71.29 and 41.84 mm, respectively. In the present study, the mean total width and height were 54.7 and 31.5 mm, respectively, regardless of sex or age. The much larger measured dimensions in that Canadian sample compared with our study might have been due to differences in the size and shape of the skull between the samples.

Independent pneumatization of either the right or left side of the frontal sinus can cause an asymmetric appearance [18]. The septum separating the two sides of the sinus usually deviates from the midline [19]. Several studies have found the width of the left frontal sinus to be larger in both sexes and that the left sinus is more likely to be damaged when performing a supraorbital craniotomy [14, 17]. We measured the width of each side of the frontal sinus as the longest horizontal distance from the midsagittal plane, unlike previous studies that measured each width as the distance from the septum. We found that the frontal sinus was slightly wider on the right than on the left side in both sexes. The left side was higher and longer in males than in females, without a significant difference.

There has recently been an increasing number of studies on the frontal sinuses using volumetric measurements. These volumetric analyses using 3D reconstruction of CT data have mostly been used in forensic medicine and anthropology for determining the sex and identifying individuals [11, 12, 20]. 3D reconstruction analysis can also be used in clinical practice since it improves the clinician’s understanding of complex structures, diagnoses, and surgical planning [21]. Park et al. [22] reported that the air cavity volume was a significant parameter for evaluating the paranasal sinuses after investigating the CT data of 260 patients younger than 25 years. Those authors reported that the mean volume of the fully-grown frontal sinuses was 3.46 cm3. However, this volume is much smaller than our results (Table 1), which might be due to technical or resolution problems.

To the best of our knowledge, there have been few 3D volumetric analyses of the frontal sinuses determining differences between adult age groups, although one study did perform linear measurements in several age groups [14]. In that study the subjects were divided into five groups according to age (all >20 years old), and the linear measurements were generally largest among those aged 31–40 years, with a tendency to decrease with aging, which was similar to our findings. McLaughlin et al. [24] suggested that the frontal sinuses expand until 40 years of age because of the mechanical stress from mastication and growth hormones. The etiology of the frontal sinus becoming smaller with age should be a focus of future research.