Variations of the musculature within the upper extremity have been widely documented, with clinical implications ranging from motor dysfunction to compressive neuropathies. Herein, we described an aberrant muscle that originated from the anterior proximal forearm, formed a tendon that coursed through the carpal tunnel, and converged with the flexor digitorum profundus muscle to contribute to the first lumbrical. Additionally, the second lumbrical consisted of two heads, originating from the index and middle finger tendons of flexor digitorum profundus. Documentation and recognition of such anatomic variants is important, as this anatomic pattern may contribute to anterior interosseous or median nerve compression, incoordination, complications during surgery, and other clinical manifestations.

The flexor pollicis longus (FPL) and flexor digitorum profundus (FDP) muscles are situated in the anterior compartment of the forearm. FPL arises mainly from the anterior surface of the radius and interosseous membrane. FDP arises from the proximal aspect of the radius, ulna and interosseous membrane. FPL forms a single tendon, while FDP forms 4 tendons, and these tendons, along with the tendons of flexor digitorum superficialis, pass through the carpal tunnel. FPL and FDP insert onto the distal phalanges of the thumb and 2nd–5th digits, respectively. The anterior interosseous nerve innervates FPL and the radial (lateral) two tendons of FDP, while the ulnar (medial) two tendons of FDP are innervated by the ulnar nerve. The four lumbrical muscles, which originate from the four tendons of FDP and insert onto the four digital extensor expansions, are responsible for flexing the metacarpophalangeal joints and extending the proximal interphalangeal and distal interphalangeal joints. The two radial lumbricals are innervated by the median nerve, while the two ulnar lumbricals are innervated by the deep branch of the ulnar nerve.

Variations of these muscles have been widely described, including accessory heads of the FPL [1, 2], tendinous interconnections between FPL and FDP [3], and anomalous attachments of the lumbrical muscles [4-6]. These anomalies often contribute to compressive neuropathies [7-11] and can impact the function and coordination of the involved muscles. Additionally, anatomic variations provide technical challenges for surgeons, as aberrant muscles can interfere with common surgical approaches used to gain access to specific parts of the body. Such variations are important to document, as recognition of these variants prepares physicians for unusual surgical presentations and aids clinical diagnosis and treatment. This case study examines a new anatomic variant involving an aberrant muscle belly within the anterior compartment of the forearm that contributes to the first lumbrical.

During a routine dissection of the left upper limb of a 74-year-old male cadaver, an aberrant muscle was discovered in the deep layer of the anterior forearm (Fig. 1A; yellow arrowheads). This muscle originated from the anterior surfaces of the interosseous membrane proximally (Fig. 2A; green arrowheads) and the anterior surface of the radius distally (Fig. 2A; cyan arrowheads). This accessory muscle coursed between FPL and FDP through the forearm, superficial to pronator quadratus, and through the carpal tunnel into the hand. The anterior interosseous nerve ran ulnar to its muscle belly, innervating the muscle along the way (Fig. 2B; white arrowhead). This muscle received arterial support from the anterior interosseous artery (Fig. 2B; red arrowhead). Like FPL, this muscle was unipennate with the muscle fibers running obliquely from the tendon itself. While the fibers of FPL ran obliquely in a posterolateral direction, the fibers of the aberrant muscle ran in a posteromedial direction, producing a mirrored appearance of the two muscles. An accessory head of FPL was noted at its proximal attachment, though no corollary muscle was present for the aberrant muscle belly. In the distal forearm, the aberrant muscle shared a tight fascial compartment with the index finger component of FDP (FDPi; Fig. 1, red asterisks) that started just proximal to the carpal tunnel. Within this sheath, the two tendons coursed deep to the median nerve through the carpal tunnel. Once in the hand, the aberrant tendon contributed to the majority of the fibers of the first lumbrical (Fig. 1; cyan arrowhead), which distally attached to the radial lateral slip of the dorsal digital expansion of the index finger. The FDPi tendon (red asterisk in Fig. 1) continued onto the distal phalanx of the index finger. Just distal to the carpal tunnel, some muscle fibers branched off the FDPi tendon to join the first lumbrical. The second lumbrical was bipennate, with the two heads originating from the FDPi tendon (Fig. 1; green arrowheads) and the middle finger component of FDP (FDPm; Fig. 1B, magenta arrowhead). The union of these two slips is indicated by the white asterisk in Fig. 1B. The median nerve contributed branches to the first lumbrical as well as both heads of the second lumbrical. To our knowledge, this variation has not been reported previously. 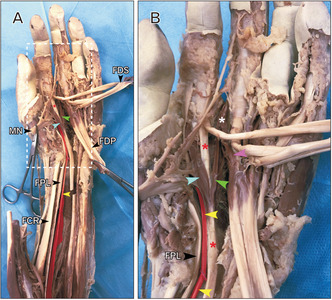 Figure 1. Shown in (A) is the distal forearm and hand from the dissected specimen. The median nerve (MN), flexor digitorum superficialis (FDS), and flexor digitorum profundus (FDP) are displaced. The aberrant muscle is indicated by a yellow arrowhead and is colored red. It courses between flexor pollicis longus (FPL) and FDP. The slip of FDP to the index finger is indicated by a red asterisk. The aberrant muscle contributed to the first lumbrical (cyan arrowhead). Shown in (B) is an enlarged view of the region indicated by the white box in (A). Again, the muscle is colored red and indicated by yellow arrowheads. The image in (B) clearly indicated the proximal attachments of the lumbricals. The union of the two slips of the second lumbrical is indicated by the white asterisk. FCR, flexor carpi radialis. 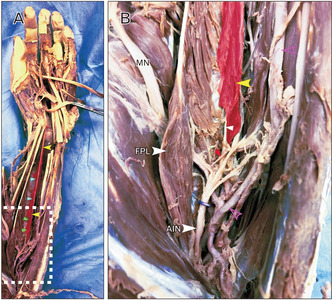 In the present case study, an aberrant muscle was discovered in the deep layer of the anterior compartment of the forearm. This muscle coursed alongside FPL and FDP, sharing a fascial sheath with FDPi as it passed through the carpal tunnel. The first lumbrical originated primarily from the distal end of this aberrant tendon, with some fibers originating from FDPi. FDPi also contributed to the radial head of the second lumbrical, which was bipennate.

Similar patterns of atypical attachments of the lumbricals have been reported previously. Basu and Hazary [4] reported that 22.2% of upper extremity cadaver dissections contained second lumbricals originating from both FDPi and FDPm, though 100% of these cadavers had normal patterns of first lumbrical attachments. Additionally, Zhang and Fenderson [6] described a similar aberrant forearm flexor that bifurcated into two lumbrical heads that both attached to the dorsal digital expansion of the index finger. The present case study reports a variation of these anomalies: the first lumbrical originated primarily from the aberrant muscle, with only a few fibers originating from FDPi, and the second lumbrical was bipennate, originating from both FDPi and FDPm. We hypothesize that the aberrant forearm muscle, by becoming the majority of the first lumbrical, displaced the distal attachment of most of the lumbrical fibers originating from FDPi, effectively converting the second lumbrical from a unipennate muscle into a bipennate muscle. Muscles in the upper limb are derived from paraxial mesoderm and their subsequent somites. Innervation to musculature of the upper limb involves multiple spinal levels and muscles in the forearm and hand are arranged in multiple layers. This requires both fusion and splitting of somite-derived mesoderm to form individual muscles. Indeed, accessory muscles in the anterior forearm are believed to derive from improper splitting of flexor digitorum superficialis, FDP, and FPL [12].

The lumbrical muscles are involved in flexion of the metacarpophalangeal joints and extension of the proximal and distal interphalangeal joints. Studies have suggested that the lumbrical muscles only weakly execute these motions in comparison to the interosseous muscles, which also attach to the dorsal digital expansions of the fingers [13]. However, the lumbricals contain a high density of muscle spindle fibers, suggesting that they are more heavily involved in proprioception rather than motor function [14]. The lumbricals are unique in that they both originate and terminate on muscle tendons, and so they help coordinate the balance between the flexor and extensor muscles of the hand. Compared to the third and fourth lumbricals, the first and second lumbricals have a higher density of muscle spindles [14] and less frequent anatomical variations [5], and so the index and middle fingers are thought to be more important for precise movements than the ring and pinky fingers. This is evident in the motion, in which small objects are gripped using the distal phalanx of the thumb and distal volar pads of the other digits, commonly with the index and middle fingers [15]. Thus, the shared innervation of the thenar muscles and the first two lumbricals by the median nerve allows for greater coordination between these muscles during precise movements.

The current study presents an abnormal forearm flexor that disrupts the normal pattern of the lumbrical muscles. The first lumbrical originates primarily from the aberrant muscle, with few fibers originating from FDPi. Given their primary function of proprioception, the reduced number of first lumbrical muscle fibers that attach proximally to FDPi and distally to the index finger could compromise the precision motions of the index finger, such as the precision pinch.

Several reports have suggested that anomalous muscles and tendons in the forearm and wrist can contribute to compressive neuropathies of the median [7, 9-11] and anterior interosseous [8] nerves. The aberrant muscle described in the present study could have compressed both nerves, given that it coursed directly over the anterior interosseous nerve and ran through the carpal tunnel. Additionally, the atypical fascial sheath surrounding the aberrant tendon and FDPi could have resulted in a potentially disastrous case of flexor tenosynovitis, as the sheath expanded more proximally into the forearm than any of the other sheaths.

Recognition of such anatomic variations are paramount given their potential functional and clinical complications. Additionally, these variants could provide obstacles during surgical procedures, especially if prior imaging has not been obtained, as surgical exposures are often inadequate to fully elucidate the attachments, innervations, and functions of these aberrant muscles, and could potentially result in complications or even failures of the procedures. Thus, surgeons must be aware of these variations to ensure they are prepared when faced with these uncommon anomalies.

In the present case study, we described an aberrant forearm flexor found during a routine cadaveric dissection. The first lumbrical received most of its muscle fibers from this aberrant tendon, and few fibers from FDPi, likely leading to attenuated fine motions and proprioception of the index finger. Additionally, the second lumbrical was bipennate, possibly due to the existence of the aberrant flexor tendon. This anatomic variant could contribute to various functional, clinical, and surgical complications, including carpal tunnel syndrome, anterior interosseous nerve syndrome, and flexor tenosynovitis. Recognition of such variants is important to adequately diagnose and treat these potential complications.

This case study was conducted under IRB exempt status. The authors sincerely thank those who donated their bodies to science so that anatomical research could be performed. Results from such research can potentially increase mankind’s overall knowledge that can then improve patient care.