A rare additional lobe of cerebellum, projecting from its superior surface

Human cerebellum plays a vital role in motor coordination, regulation of muscle tone and maintaining the equilibrium of the body. It seldom shows anatomical/morphological variations. Herein, we report the presence of a small additional lobe projecting out on the superior surface of the right cerebellar hemisphere in the para-vermal area in an adult male cadaver. There was a notch on the tentorial surface of the occipital lobe of the right cerebral hemisphere, corresponding to the additional lobe of cerebellum. The additional lobe was histologically normal, with no evidence of any tumour cells. Knowledge of this variation is of importance to radiologists, neuroanatomists and neurosurgeons.

The cerebellum, which is the largest part of the hindbrain, is located in the posterior cranial fossa, behind the fourth ventricle, the pons, and the medulla oblongata. Tentorium cerebelli, an extension of the dura matter, separates the cerebellum from cerebrum. It has two hemispheres, joined by the vermis and is sub-divided into three anatomical lobes—anterior, posterior, and flocculonodular, which are separated from each other by two transverse fissures. Anterior and posterior lobes are separated from each other by V-shaped primary fissure, while the posterolateral fissure separates the posterior and flocculonodular lobes from each other. Superior and inferior surfaces of the cerebellum are separated from each other by deep horizontal fissure found within the posterior lobe. The cerebellum is neuron-rich, containing about 80% of the brain’s neurons organized in a dense cellular layer [1, 2]. The cerebellum is a vital component in human brain as it controls balance and movement. It also coordinates gait and maintains posture, controls muscle tone and voluntary muscle activity; but is unable to initiate muscle contraction. Damage to this part of the brain in human results in a loss in ability to control fine movements, maintain posture, and motor learning [1, 3]. Histologically, the cerebellum is comprised of outer cortex and inner medulla. The cerebellar cortex is a sheet-like structure, which is less than 1mm in thickness. This folds and holds the inner white matter (cerebellar medulla). The grey matter of the cortex divides into three layers: an external, the molecular layer; a middle, the Purkinje cell layer; and an internal, the granular layer. The molecular layer contains two types of neurons: the outer stellate cell and the inner basket cell [2, 4]. The four deep nuclei of the cerebellum are the dentate, emboliform, globose, and fastigii nuclei and they act as the main centres of communication, sending and receiving information to and from specific parts of the brain. These nuclei receive both inhibitory and excitatory signals from other parts of the brain which in turn affect the nuclei's outgoing signals. The cerebellum receives vascular supply from three main arteries; the superior cerebellar artery, the anterior inferior cerebellar artery and the posterior inferior cerebellar artery. These arteries originate from vertebro-basilar arterial system [5]. Very few anomalies/variations of cerebellum have been reported. Herein, we report a unique additional lobe of cerebellum and discuss about it clinical relevance. 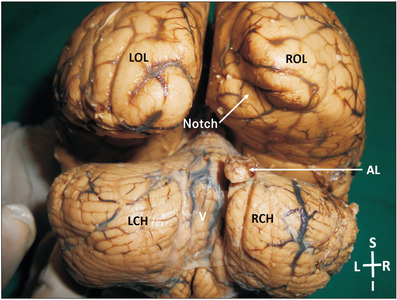 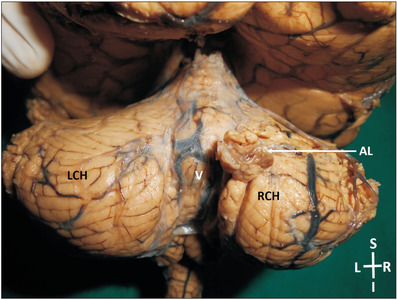 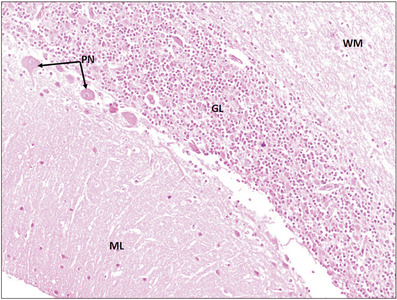 Anatomical abnormalities of cerebellum, such as presence of additional lobes are extremely rare. In the past, a cerebellar vermal abnormality has been observed in an 11-year-old female patient during MRI scanning. An extra vermis attached to the anterior lobe of the native vermis, mainly to the culmen was observed in this case. Herniation of anterior superior folia of this extra-cerebellar tissue had occurred superiorly through the left side of the tentorial notch. The extra-vermis had a primary ﬁssure and a pre-pyramidal ﬁssure [6].

A case of duplication of a unilateral cerebellar hemisphere associated with a complex ipsilateral ear anomaly was reported by Jackson et al. [7]. Another reported anomaly of cerebellum was a case of supernumerary hemi-cerebellum in an adult female patient who presented with headaches and episodes of syncope was reported by Hattapoğlu et al. [8]. In another study, a bony outpouching with a small defect in the bone outline on the left side was found on CT examination. This outpouching had third cerebellar hemisphere, which appeared to be only mildly dysplastic and was attached to the medulla on the right side (Table 1) [9].

Table 1 . A table showing the previously reported variations of the cerebellum

Knowledge of the process of early fetal cerebellar development helps in understanding of cerebellar variation and malformation. Unfortunately, most of the studies on the cerebellar development are from rodents. Human studies on development of cerebellum are very few. During the fifth week of gestation, thickening occurs bilaterally in the alar plate of the rhombencephalon, forming the rhombic lips, which are the primordia of the cerebellar hemispheres [10, 11]. The neuroepithelial zones, in the roof of the fourth ventricle and the rhombic lips, are the location of germinal matrices, where the cells of the cerebellum and many brain stem nuclei will form. On fusion of the developing hemispheres at the midline during the ninth gestational week cerebellar vermis formed, fusion then continues inferiorly as the hemispheres grow [10, 12]. According to the recent studies [13, 14] on developing foetuses aged from 6 to 15 weeks, it was noted that the hemispheres and the vermis develop independent of each other. The hemispheres develop from 7th to 9th week of gestation by the protruding rhombic lips, whereas, the vermis develops in the midline area after 12th week of gestation. The formation of the current additional lobe would have occurred during this stage of union between the median vermis and the lateral hemisphere. However, the exact cause for formation of this additional lobe is yet to be understood as there is no report regarding such a lobe hitherto.

The current case is unique and defers considerably from the previously reported cases. The additional lobe projecting from the superior surface would not have caused any functional problems to the individual since it was small and histologically normal. The corresponding notch in the occipital lobe of the cerebrum was possibly a coincident because there was no upward stretching of the tentorium cerebelli, corresponding to the additional lobe. Knowledge of this case could be important to radiologists and neurosurgeons. Presence of additional lobes like this could lead to diagnostic dilemmas during radiological examination.

The authors acknowledge the help and support rendered by the University and Institutional officials and also the dissection hall supporting staff in carrying out this research.