Total mesorectal excision (TME) is the gold standard for curative rectal cancer surgery worldwide, which reduces local recurrence rates and improves survival rates [1, 2]. In TME, surgeons excise the mesorectum including the lymphovascular tissue which is considered as the possible source of pelvic recurrence [3]. Lymphatics from the rectum drain along rectal arteries to internal iliac nodes. The middle rectal artery (MRA) is regarded as an integral part of the lymphatic drainage to the lateral pelvic nodes, and is the only artery encountered during TME running into the rectum through the proper rectal fascia in the pelvis [4]. Therefore, understanding the anatomy of the MRA is necessary for surgeons to perform TME with efficacy and safety.

Previous studies have provided anatomical knowledges about the MRA: its frequency, origins, courses, relationships to the lateral ligament, and distributions to the rectum [5-7], however it is still not easy to grasp the schema of the MRA. One of the major causes for this is based on the complexity of the pelvic vasculature. In previous reports investigating the origins of the MRA, whole detailed vasculature from the internal iliac artery to the MRA have not been described. Adoption of oversimplified schema may limit comprehensive understanding about pelvic vasculatures including the MRA.

The aim of this study was to categorize MRAs regarding their detailed vasculature patterns with identification of their frequencies, and to provide schematic information that would improve clinical applicability.

The institutional review board of the Catholic University of Korea ruled that a cadaveric study was beyond its review authority. All cadavers used in this study were donated to the Catholic Institute for Applied and Clinical Anatomy under informed consent. Exclusion criteria included any gross evidences of pelvic surgeries or malignancies, which could affect normal pelvic anatomy.

Forty sides of the pelvis from 20 cadavers (10 male, 10 female) were investigated. Ages at death of the specimens were 85.5±7.4 years (range, 68.8–98.9 years). For purposes of the study, the pelvis was sectioned in the midsagittal plane with preservation of intrapelvic organs and embalmed in 10% formalin solution. The peritoneum was detached and removed from the pelvic brim down to the pelvic floor. All the vascular branches from the internal iliac artery were carefully dissected, focusing on identification of the MRA. When the MRA was present, all the arterial vasculatures related to its origin from the level of the internal iliac artery were investigated.

The MRAs were grouped into major groups depending on their origins. Each major group was subdivided into minor groups as the MRA-originating artery also presented various branching patterns from the internal iliac artery.

Frequencies of the MRA according sex and side of pelvis are described in Table 1. The MRA was identified in most cadavers, and commonly in the pelvic sides. More cases of MRA were identified in males or the right pelvis, but a considerable number of cases were also observed in females or the left pelvis. The MRA was present bilaterally in seven cadavers (35.0%, 7/20 cases), and unilaterally in 11 cadavers (55.0%, 11/20 cases).

Table 1 . Frequencies of middle rectal artery regarding sex and side of pelvis 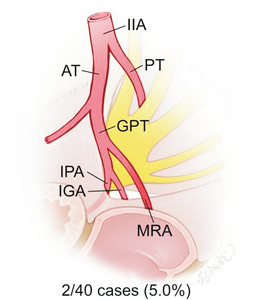 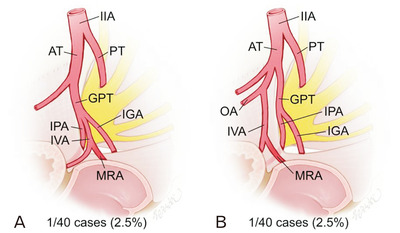 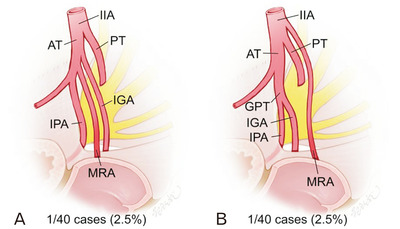 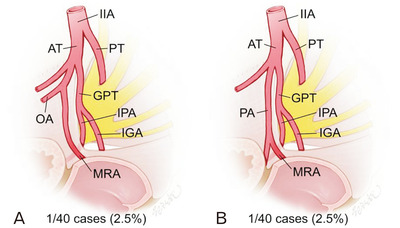 In this study, the anatomy of the MRA was provided in a manner applicable to the TME. A complete TME is defined as “complete removal of the lymph node bearing mesorectum along with its intact enveloping fascia,” and includes anterolateral division of the lymphatics and middle rectal vessels. For this, the dissection plane is extended from the mesentery root above the aortic bifurcation downward into the pelvis and in a lateral to medial fashion to open the lateral pelvic wall to identify MRA [3]. Through dissection of 40 hemi-pelvises, vasculature patterns related to MRAs with variability were identified. The schematic figures for these were presented to display detailed courses from the internal iliac artery to the origin of the MRA for application to the step of lateral pelvic dissection and identification of the MRA.

The present study identified MRA in 90% of the cadavers and in 62.5% of the pelvic sides. The frequencies of MRA in previous studies ranged from 12% to 97% in subjects, and from 8% to 95% in pelvic halves [4]. According to Kiyomatsu et al. [4] (2017), this variety of frequency may not be based on the detection method, either dissection or imaging technique, considering that the accuracy of detecting MRA has not improved over time. This implies that precise dissection is not inferior to imaging technology when identifying the small vasculature. The MRA, as a result of dissection in this study, was identified as a common structure in both sexes and bilateral sides; thus, surgeons should be reminded in order to safely perform rectal surgery.

Multiple anatomical textbooks describe the MRA as an artery arising directly from the anterior trunk of the internal iliac artery or from the inferior vesical artery [12, 13]. However, the results of the current anatomical investigation suggest that the most common origin of the MRA is the internal pudendal artery, followed by the inferior gluteal artery. The internal iliac artery and inferior vesical artery constitute the less common among origins of the MRA. These results correspond to the findings of previous studies [5-7]. The gluteal-pudendal trunk, which was identified to give off a MRA in two among 40 pelvic halves in the present study, was the third most frequent origin of the MRAs in the study of Bilhim et al. [7] (2013). The MRAs arising from the obturator artery and prostatic artery have also been previously reported in the literature [7, 14].

Despite the consistent reports about the origins of the MRA, identification of this vessel in rectal surgery is still a laborious step due to the complex pelvic vasculature. In this study, the internal pudendal artery and inferior gluteal artery, which primarily gave off the MRA, usually arose directly from the anterior trunk of the internal iliac artery (type Ia and IIa) as classical anatomical findings, but they formed gluteal-pudendal trunk before bifurcation with a considerable frequency in other cases (type Ib and IIb). Moreover, there were rare cases of the internal pudendal artery and the inferior gluteal artery originating from the posterior trunk (type Ic and IIc), not from the anterior trunk. In the other types of MRAs (type III to VII), pelvic vasculatures from the internal iliac artery to the MRA also presented complexity. Even the less common of the MRA origins and pelvic vasculature patterns should be considered in planning the surgical approach to prevent unexpected vascular injury. Therefore, the schematic information of this study, which included detailed courses of the MRA and pelvic vasculature, is valuable for rectal surgeons in minimizing the risk of vascular injury during the TME.

The anatomical findings of this study are also applicable to radiologic interventions. To perform arterial embolization procedures in cases of severe rectal hemorrhage [15], recognition of the MRA anatomy and possible variations of the pelvic vasculature are required. Schematic information about the possible vasculature patterns found in this study would help to minimize time consumption during intervention procedures.

This study had several limitations. First, the distribution of rectal arteries within the submucosal layer of the rectum was not investigated. For the purpose of application in rectal surgeries, this study focused on the vasculature pattern of MRA from the internal iliac artery to the entry site to the rectum. Second, among the MRA origins reported in previous studies, the median sacral artery giving off the middle rectal branch was not identified in this study. DiDio et al. [5] (1986) reported frequencies of this type as 3.3% (1/30 cases). Follow-up study with a larger sample size would possibly find other minor types and help provide illustrations for them. Despite these limitations, the advanced anatomical findings of this study related to MRA and pelvic vasculature is considered noteworthy for its improved clinical applicability.

The authors would like to thank the donors and their families without whom this research would not be possible. This research was supported by the Basic Science Research Program through the National Research Foundation of Korea (NRF) funded by the Ministry of Education (2018R1D1A1B07048476).