A variety of shapes has been reported for the roots and root canals of maxillary first premolars. The purposes of the present study were to determine branching and shapes of the roots of maxillary first premolars, as well as age-related changes using slice images obtained with cone-beam computed tomography (CBCT) for dental use. CBCT-reconstructed images of 125 cases that included maxillary first premolars were used as subjects. Slice images at the cervical one-third, center, and apical one-third positions of the root were prepared. Root branching and number of root canals was determined at each measurement position in the images. The subjects were divided into three groups: younger than 30 years, 30 to 50 years, and over 50 years. The root canal morphology was compared among these age groups. Single-rooted premolars were the most frequent. As for number of root canals, a single-canal premolar was observed at the position of the cervical one-third in 33.6%, at the center in 35.2%, and at the apical one-third in 56.0%. Thereafter the subjects were divided into groups by age, namely, younger than 30 years, 30 to 50 years, and over 50 years old, and it was revealed that the ratio of the two-canal type increased with age. In regard to tooth morphology, it was confirmed that the two-canal type shows more frequent occurrence with aging in maxillary first premolar. Based on our findings, we consider that CBCT can be useful for determining the root canal morphology with complicated shapes.

An accurate understanding of individual dental morphology is important for proper dental treatment, though a wide variety of roots and root canal shapes of maxillary first premolars has been reported [1-11] .Thus far, most observations have been made using extracted and India ink-stained premolars, and transparent root canal specimens [1-3], or dental X-ray images [4-8]. However, cone-beam computed tomography (CBCT) has recently been found useful for diagnosis based on detailed observations of the internal structures of hard tissues [10-13].

Maxillary first premolar root branching has been reported in various studies, with the occurrence of a single-rooted premolar reported in 11.7% to 39.5% of examined cases, whereas the occurrence rate of a two-rooted premolar ranged from 56.5% to 86.0% [1, 3, 4]. Furthermore, ethnicity-related differences in regard to root shape are known, as multiple-rooted maxillary premolars are a characteristic in Caucasian subjects [3, 4]. There are also various reports regarding the number of root canals. For determining root canal morphology, the classification of Vertucci [1, 2], in which shape was divided into 8 types by ramification patterns, and that reported by Pineda and Kuttler [5] showing the number of root canal ends at the root apex, have been used.

It is considered that root canal shape changes with age. However, few quantitative investigations of this issue have been presented. The present study was conducted using CBCT for the purpose of determining the number of roots and root canal shapes, as well as age-related changes of maxillary first premolars in Japanese subjects.

- No root resorption or radiolucent area in root apex

- No canal filling or prosthesis in post or crown

Using the Morita One Volume Viewer imaging software package (J. Morita MFG Corp.), reconstructed images vertical to the tooth axis were obtained, then slice images of the dental root at the cervical one-third, center, and apical one-third positions were prepared to observe root shape (Fig. 1). For morphological observation of root canals, binary images were prepared using the Image J public domain software program [14], with the range of the maxillary first premolar root selected on each slice image. Binary images were processed using image data within the root range as the baseline. For the measurement items, the number of branching roots was confirmed in each slice image for assessment of root shape and the number of root canals was also determined in each slice image using binary images for observation of the root canal shapes (Fig. 2). Moreover, the subjects were divided into three groups according to the age, younger than 30 years consisting of 52 cases, between 30–50 years, 50 cases; and over 50 years, 23 cases. 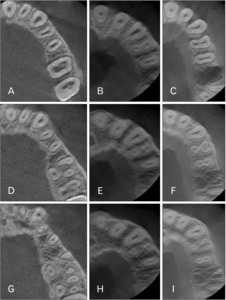 The present study protocol was approved by the Ethics Committee of Ohu University (No. 234).

Table 2 . Classification of root canal shapes of maxillary first premolars and rate of occurrence of each type

Table 3 . Root canals numbers of the maxillary first premolars in each age group 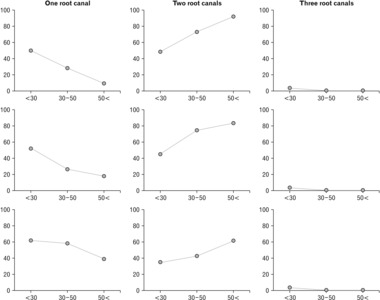 Figure 3. Root canal numbers of the maxillary first premolars divided by age. Left: Occurrence of single canal. Center: Occurrence of two canals. Right: Occurrence of three canals. The shape at the cervical one-third, root center, and apical one-third is shown in the upper, middle, and bottom, respectively. Charts show occurrence after dividing into age groups (from the left: <30, 30–50, 50< years old).

The internal structures of teeth are complicated and difficult to understand by dental X-ray imaging alone. However, with the availability of CBCT, the internal structures of hard tissues are now able to be visualized in a three-dimensional manner [12]. Although patient radiation dose with CBCT is generally higher as compared to panoramic X-ray imaging, effective dose from CBCT is lower than multislice CT [13].

For radiographic diagnosis, it has been reported that radiolucency on the apical side is decreased due to increased dentin and alveolar bone in teeth with two root canals [1, 8]. On the other hand, it is very difficult to precisely visualize root canal shapes using two-dimensional radiography [12].

In the AAE/AAOMR Joint Position Statement on use of CBCT in Endodontics, CBCT is suggested to be a useful diagnostic imaging procedure for cases with a complicated and irregular root canal morphology [15]. Accordingly, it is also recommended that for diagnosing root canal morphology, proper utilization of CBCT is important so as to reduce exposure by use of the correct field of view setting. CBCT produces gray scale images without CT values, thus various techniques have been reported for measurements, including observation by a single examiner [16], reliability confirmation of measured data by use of a Kappa test after multiple measurements [17], and determinations on the basis of consensus of multiple examiners [18-21].

Blattner et al. [18] reported findings of a study in which the number of root canals was determined based on consensus agreement by an oral and maxillofacial radiologist and endodontist regarding second mesiobuccal canal emergence rate in the mesiobuccal root of maxillary first and second molars using extracted teeth, and they showed a high correlation between CBCT findings and actual observations. It was also reported that deviations among examiners can be avoided by using an image processing technique for assessment of the smear layer of dentin in scanning electric microscope gray-scale images [22, 23]. In the present study, the root canal shapes were extracted by binary image processing after selecting the inside of the outer configuration of the roots on CBCT slice images using the Image J software package [14], thus allowing analysis of root canal shapes with reference to the binary image obtained.

Various classifications have been reported for root canal shape observations. Vertucci [2] prepared transparent root canal specimens of maxillary first premolars and categorized them as type I to VIII, though only the root canal shapes were classified, irrespective of root morphology. In the present study, premolars were examined in the plane vertical to the tooth axis for observing the shapes of both the root and root canals. It has been suggested that the pulp chamber does not transit to the root canal at the level of the cement-enamel junction, as the pulp floor base is closer to the apical side from the cervical line [24]. Accordingly, the shapes of the roots and root canals were observed using CBCT slice images at the cervical one-third, center, and apical one-third positions of the root in the present study.

Vertucci [2] prepared transparent root canal subjects using maxillary first premolars from subjects whose age, gender, ethnicity, and reason for extraction were unknown, and found that Type IV, which indicates separation into two from the root canal orifice to the apical foramen, was found in 62.0%. Of the premolars from Japanese subjects used in the present study, two canals at the cervical one-third, center, and apical one-third (2-2-2) positions was observed in 47 of 125 cases (37.6%).

It has been suggested that a three-rooted maxillary premolar is a characteristic of the Caucasian subjects [3, 4]. In a report of CBCT findings of a Spanish population, three-rooted premolars were found in 2.6% [11], while the frequency was 9.2% in a Polish population [4].

With two canals, the radiolucency of the root canal is changed [1, 8] and it has also been reported that radiolucency is drastically decreased in images of three-rooted maxillary premolars [5]. Pineda and Kuttler [5] reported the frequency of three root canals in premolar was 0.5%, whereas Vertucci noted 1.25% [2] and Sieraski et al. 5%–6% [7]. In the present study of Japanese subjects, three canals at the center-apical side were observed in 1.6%. It has also been noted that the radiolucency of the pulp chamber was suddenly decreased in cases with three canals [6, 24]. As for the characteristics of the outer shape of a maxillary first premolar with three canals, it was reported that the mesiodistal diameter at the root center was frequently the same or larger than that of the crown [7]. In the present study, a similar tendency was observed in three canal premolars.

It is impossible to distinguish reparative dentin caused by stimulation from the addition of secondary dentin due to aging [24], as formation of secondary dentin continues throughout life, which narrows the pulp cavity [26]. However, few reports are available regarding the relationship between root canal morphology and age. Pineda and Kuttler [5] compared X-ray findings of various root canals in subjects divided into discontinuous three age groups; younger than 25 years, 35–45 years, and over 55 years, and reported findings showed that the root canal diameter was reduced with age, though the authors did not provide morphological measurements of the root canals or compare shapes. There were some teeth used in the present study exist in the interstice of these age group. So, we classified root canal shape among subjects younger than 30 years, 30–50 years, and older than 50 years. There was difference of the root canal shapes among three age groups. It might be effected by the addition of secondary dentin. It has been shown that the maxillary first premolar begins calcification at the age of 1.5 years, then erupts at the age of 10–11 years and completes root growth at 12–13 years old [27]. Among the subjects used for root canal measurements in the present study, the youngest subject was 12 years old, who showed a seemingly fully-grown root in CBCT images, while the oldest was 69 years.

It was reported 68.8% of the maxillary first premolars have mesial concavity [28]. The mesial and distal wall of the pulp chamber of the maxillary first premolar often bulge prominently into lumen [29]. So, the root canal might be effected by the root shape. This was considered to be the result of root canal morphological changes caused by addition of secondary dentin in the pulp chamber.

In conclusion, a finding of a single root was the most frequent among the maxillary first premolars observed in the present study at apical one- third of the roots. As for the root canal, teeth with a root canal morphology of 2-2-2 (two canals at the cervical one-third, root center, and apical one-third positions) were most frequently observed. When we analyzed root canal shapes, it was observed that the ratio of premolars with two canals was increased with age. Based on our findings, we concluded that CBCT is useful for determining the root canal shapes of maxillary first premolars, which are known to have a complicated morphology.