Body donation trends in Korea have changed significantly over the last 3 decades. Establishing a body donation system will promote donations to universities for academic purposes. Yonsei University College of Medicine started its own body donation system in 1992, including documenting donors’ records. However, there has been no reported attempt to analyze the trend of these records, which could provide noteworthy information that can be interpreted for medical advances. This study performed a statistical analysis of the donors’ records between 1992 and 2019 to analyze the sociological and anthropological changes. Donor personal information such as sex, age, religion, and place and cause of death were extracted from the Yonsei University College of Medicine database. Our statistical analysis revealed significant correlations between donors’ records and the changes in the number of geriatric hospitals, religious beliefs, number of donations, and donor age.

Until 1971, it was difficult to satisfy cadaver donation demands in Korea for educational purposes, since each university had its own unorganized system, which hindered a stable supply. The Seoul Conference Faculty established the committee that organizes the body donation system in Korea, and from March 1972 that committee provided accessible means for efficient body donation to universities. However, due to legal issues, universities received barely 1 cadaver for every 30 to 40 students. Prior to 1992, local governments provided corpses of death-row prisoners and those of people who died without surviving relatives for cadaver laboratorial use and educational purposes [1]. Yonsei University College of Medicine initiated its own advanced body donation system in 1992 in an effort to resolve this deficit. Currently, in order to donate one’s body, a donor consent form must be obtained from both the donor and their family members.

A favorable environment for body donation was created through the Revised Act of Corpse Dissection and Preservation law in January 1995 and the organ donation campaign started by a Christian pastor, which later expanded its interest into full-body donations. Most medical universities in Korea had no difficulties receiving body donations from 2006. In the present day, most of the cadavers used in anatomy laboratories are from body donations. Universities take care of the donors with respect and have constructed memorial stones and charnel houses to tribute their deeds [1].

Christianity is one of the representative conventional philosophies in Korea, while public understanding and levels of adaptivity with the traditional values of Confucianism still remains. While traditional Korean Confucianism values passed down from parents reject any form of unnatural disturbance of the body, therefore objecting to the idea of body donation, altruistic values of Christianity have encouraged more people to donate their body for academic purposes [3, 4]. Because Yonsei University is one of the leading Christian educational organizations in Korea, it has received many body donations and recorded clinically relevant donor information.

In the last 3 decades, Korean philosophical norms have barely changed while healthcare reform affects the target population’s lives daily, yet few changes have been made to factors correlating with body donation trends. This article investigates the statistical value of correlating factors that influence these trends.

The research subjects came from 2,418 body donations made to Yonsei University College of Medicine between 1992 and 2019. Consent forms containing detailed information were obtained from the donors themselves and their family members prior to their death.

The data set was based on death records collected from Yonsei University College of Medicine. Age, sex, religion, and place and cause of death were analyzed using IBM SPSS Statistics for Windows, Version 23.0 (IBM Co., Armonk, NY, USA) for one-way ANOVA, chi-square, and frequency-table tests, as appropriate. Time frames, each year, were compared to investigate the effects of each factor on the general trend of body donation in Korea. The statistical -values were calculated using parametric tests, and a value of <0.05 was considered to be statistically significant.

This study indicated that the number of body donations made to the Yonsei University College of Medicine from 1992 to 2019 increased from 7 to 128 annually. 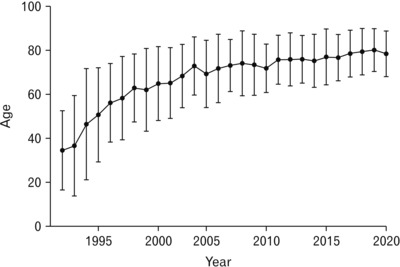 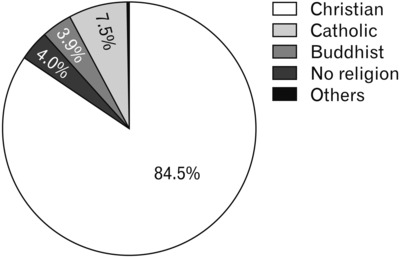 Place of death was only documented from 2005 (Table 2), and was categorized into the home, hospital, geriatric hospital, nursing home, and others. This table indicates how the trend for place of death changed over time. The numbers of nursing facilities (geriatric hospitals and nursing homes) increased from early 2000, as did the numbers of deaths in these facilities, while home deaths decreased. Analysis was performed using a chi-square test, and the place of death result was statistically significant (<0.001) (Table 2).

Table 2 . Place of death by year

Cause of death has been documented since 1994 for 2,259 bodies (death by unknown factors and undocumented causes of death were not included) (Table 3). There were 19 official factors causing death, as listed in Table 3. The most common cause of death was neoplasm (37.2%). Death by old age was included in symptoms, signs, and abnormal clinical and laboratory findings not elsewhere classified, accounting for 302 of the 336 cases. The following four cause-of-death factors were not included due to no confirmed cases being present: (1) diseases of the eye and adnexa, (2) diseases of the ear and mastoid process, (3) diseases of the skin and subcutaneous tissue, and (4) pregnancy, childbirth, and the puerperium.

Table 3 . Cause of death

Table 3 lists the causes of death from 1994 to 2019. Death by neoplasm was the most common each year. The Yonsei University College of Medicine stopped receiving body donation from suicide cases due to ethical issues after 2004, which is included in injury, poisoning, and certain other consequences of external causes. Analysis was performed using a chi-square test, and the cause of death result was statistically significant (<0.001) (Table 3, Supplement Table 1).

The Yonsei University College of Medicine started receiving body donations from 1992. The reason for the dramatic increase in mean age immediately following 1993/1994 is due to prior donations including a large proportion of deaths at 0 to 1 years old, including stillborn cases.

Modern-day Korean society has established its national identity in its conventional belief of Confucianism [6]. Confucianism emphasizes the importance of preserving the body received from your parents, resulting in a prevalence of burial after death. Funeral culture was generally focused on burial amongst Koreans until the mid-1990s. The Korean government promoted cremation as part of funeral culture in the early 1990s to solve the nationwide problem of the lack of space caused by centuries of burial funerals [7, 8].

Another factor fueling the dramatic change from burial culture to cremation is the societal change in religious beliefs from Confucianism to Christianity, since Christian values play a significant role in altering mindsets toward body donation. A social movement encouraging cremation was initiated by Protestant ministers in December 1998, who opened the ‘Christian Center for Promoting Cremation.’ They urged to Christians that cremation is not against their doctrine of resurrection, and also emphasized to other religious groups that cremation is simply another method of corpse disposal. Protestant churches actively led this innovation by working on opening up conservative mindsets by teaching the positive aspects of cremation and building Protestant columbaria with specialized memorialization [9]. In the late 1990s, cremation became popular and emerged as the major disposal method in funerals as a result of such endeavors.

Cremation rates increased from 7% to 84.6% in the last 20 years [10, 11]. From this trend it could be inferred that the changes in attitudes toward treatment of the body has led people to understand different aspects of body donation, as opposed to the negative approach used previously. The value shift from the importance of preservation of the body to making a social contribution by donating the body for medical purposes is therefore the fundamental factor that might have caused the increase in body donations in Korea [12] (Table 1).

Comparatively large numbers of Christians amongst body donors to Yonsei University could be explained by the university being the oldest and biggest missionary university in Korea (Fig. 2). In addition, Yonsei University Severance Hospital was the first Western medical hospital in Korea [13].

Over the last fifty years, Korea has experienced a dramatic socioeconomic shift. Rapid industrialization and economic growth brought even more attention to the public wealth department and led to national health reform. As of 2004, 96.5% of Koreans were covered by insurance [14]. Being one of the most rapidly aging populations, Korean medical communities have warranted more attention being paid to geriatric care. Since 2004, National Health Insurance has supported a wide range of medical expenses from geriatric care, alleviating the burden of expensive medical costs from the patient. Due to lower expenses, overuse of geriatric hospitals by people who do not need urgent medical care has become a common trend [15]. The number of geriatric hospitals has increased by approximately 30 times from early 2000 to 2018 [16, 17], contributing to the rapid growth in death numbers in geriatric hospitals (Table 2).

Since a randomized controlled trial was not conducted to validate this statistical relationship, clear causality for the trend cannot be determined. However, a correlation was found between the increase in body donations and the number of geriatric hospitals.

Donor records categorize large portions of cases into natural death in cases where autopsies are not mandated. This causes a statistical bias as those diagnosed with a natural death can be classified differently when correctly examined at the time of death. We included such cases in the factor of symptoms, signs, and abnormal clinical and laboratory findings not elsewhere classified (Table 3, Supplement Table 1).

In conclusion, analyses of body donation trends indicate that males have had a higher donation percentage than females and a greater increase in the mean age of donation. As the number of geriatric hospitals increased from the beginning of 2000, the number of people who died in geriatric hospitals increased. Also, most of the people who donated body to Yonsei University College of Medicine were Christians. Our analysis indicates neoplasm is the most common cause of death among body donors.

There are some limitations in this study that should be acknowledged. There may be a selection bias since Seoul-based Yonsei University is unable to receive donations from outside of the city area due to systemic and bureaucratic limitations. As it is the largest and oldest missionary school in Korea, most body donors are Christian, adding statistical bias to the results. For these reasons, the findings of this study may not truly represent the overall body donation trends in Korea. Future research should include comparative studies that minimize statistical biases and further validate research findings. This can be accomplished through cooperation among medical centers with different backgrounds.