Duplication of the odontoid process with other congenital defects of the craniocervical Junction: case report and review of the literature

Duplication of the odontoid process remains an uncommon developmental pathology that has been reported rarely in the literature [1-4]. This variant has previously been linked to cases of pituitary gland duplication and Klippel-Feil syndrome, although the exact etiology and pathogenesis are incompletely understood [2, 3, 5]. Many other anatomical variations have been reported in relation to odontoid malformation, the most common being os odontoideum [1]. Other reported congenital or acquired variants of the odontoid process include hypoplasia, aplasia, anteversion, malposition, odontoid process bicornis, ossiculum terminale, and fused nonseparated odontoid process to the anterior arch of the atlas [1, 4, 5].

A two-year-old Caucasian male presented with congenital torticollis and limited head rotation. The patient was born at normal gestation and was the second son for his mother. No known medical conditions or history of surgery were noted. On physical examination, the child moved all extremities, and had intact sensation in all major dermatomes tested. Cranial nerves and major peripheral nerves were within normal limits. His cerebellar examination was felt to be normal. The neck was thought to be short. There was torticollis with neck deviation to the left. Rotation of the head was restricted and more so to the left. Flexion and extension of the head appeared to be normal. Radiographs noted a fusion anomaly at C2/C3. Computed tomography (CT) further identified a duplicated odontoid process in association with the previously noted C2–C3 fusion, incomplete anterior arch of C1, variant bony process of the transverse process of C1, and enlarged right jugular foramen (Fig. 1).

Figure 1. Three-dimensional reconstructed computed tomography of the craniocervical junction in the patient presented herein. Note the two ossification centers (arrow heads) of the duplicated odontoid process via a posterior view through the foramen magnum and from a posterior view (left). On this same image, the right jugular foramen (arrow) was significantly enlarged compared to the left. From an anterior view (right), note again the two ossification centers for the apical parts of the odontoid processes (arrow heads), the split anterior arch of C1 (asterisks), and the fused C2 and C3 vertebrae (black arrow). Also, note the right-sided inferior bony extension from the transverse process of C1 (white arrow).

The two separate apical ossifications centers of the odontoid process were more or less in the same coronal plane with the left one being slightly larger than the right. The anterior arch defect of C1 was approximately the width of the base of the combined odontoid process bases. The margins of the anterior arch were sclerosed indicating a congenital defect. The bodies of C2 and C3 were fused i.e., Klippel-Feil anomaly. The right-sided jugular foramen was found to be three times larger than the more normally sized left jugular foramen. Lastly, the left transverse process was found to have an inferiorly pointed approximately 1 cm long, bony excrescence. The remaining intracranial e.g., normal pituitary gland and spinal anatomy were felt to be normal.

The development of the human vertebral column has been widely explored, key research illustrating the vital role of neurulation and the subsequent formation of somites [6]. Somites are blocks of mesodermally-derived tissue that sit adjacent to the notochord bilaterally [6]. In addition, homeobox (hox) and paired box (pax) genes are crucial in developmental control and the organization of the craniocervical junction during embryogenesis [7]. Following neurulation, the mesodermal tissue adjacent the notochord creates 42–44 pairs of somites by the end of the fifth week of embryogenesis [6, 7], each somite further differentiating into a sclerotome, dermatome, and myotome [7]. These various subspecialized structures go on to form the vertebrae and ribs, skin, and muscles, respectively [6]. The proatlas is a rudimentary vertebral structure and precursor of the craniocervical junction, formed from the fourth occipital sclerotome [7, 8]. This structure gives rise to the apex of the odontoid process in addition to sections of the atlas and both the apical and alar ligaments [6, 9]. However, the body of the odontoid process originates from the centrum formed from the first spinal sclerotome, which also forms most of the atlas. Therefore, while the entire odontoid process is formed via the first spinal and fourth occipital sclerotomes, the axis body originates via the centrum of the second spinal sclerotome [7-9]. 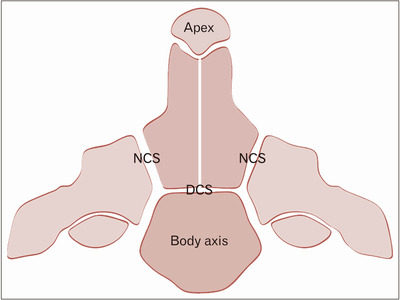 As discussed, there are numerous interconnected and simultaneous embryological events that ultimately lead to development of the odontoid process and the accompanying craniocervical junction. While the exact mechanism of odontoid process duplication remains unknown, current research suggests a lack of midline fusion of the two ossification centers within the basal odontoid process [1, 5]. Dysregulation within mesenchymal development, vascular abnormalities, and even abnormal migration or segmentation of sclerotomes have been suggested as the pathogenesis of this condition [1]. Furthermore, since nearly all case reports involve some combination of associated syndromes, vertebral defects, pituitary duplications, and midline abnormalities, some suggest that the etiology lies in faulty interactions among the notochord, prechordal plate, and surface ectoderm [4, 5]. Other possible causes include aberrant fusion or interactions across the cartilaginous synchondrosis between the odontoid process and axis, although these need to be explored further. Proatlantal derailments have been used to explain entities such as an epitransverse process. Although our case presented with an inversely positioned aberrant process on the transverse process, such a variant might be related embryologically. The apex of the odontoid has been attributed to the proatlas so the duplicated odontoid process ossification centers might relate to dysembyrology of the atlas as well. The basis of anterior arch of C1 defects, analogous to the duplicated odontoid process, can be tied to abnormal ossification center fusion or development [12]. Lastly, the region of the jugular foramen is also attributed to arising from the proatlas (Fig. 3). 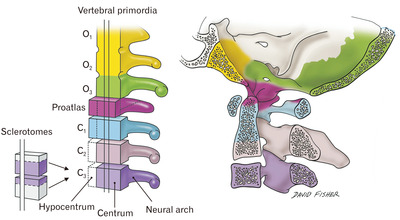 In conclusion, odontoid process duplication is an extremely rare anomaly that is underrepresented in the current literature. To our knowledge, only five cases have been reported to date, including the case presented here [1-4]. This case was also found to have Klippel Feil anomaly of C2/C3, incomplete anterior arch of C1, unusual inferior process of the transverse process, and an enlarged right jugular foramen. To our knowledge, this is the first report in the literature including this specific constellation of abnormalities.