The straight sinus is a division of the dural venous sinuses, found beneath the splenium of the corpus callosum. At the internal occipital protuberance, it comes together with the superior sagittal sinus and transverse sinus to form the torcular Herophili. It functions as a major site of venous drainage for the cerebellum, inferior sagittal sinus, and vein of Galen. Many morphological variations have been reported involving the angulation, positioning, and number of straight sinuses present. Patients with Chiari II and III malformations have been observed to have a high incidence of anatomical variation with their dural venous sinuses, including vertically oriented straight sinuses. Additionally, there is a high rate of hydrocephalus in this patient population. Herein, we report a vertically oriented straight sinus in a child.

The straight sinus (Fig. 1) is a dural venous sinus located between the periosteal and meningeal layers of the dura mater [1]. A wide variety of anatomical variations have been identified involving the angulation, positioning, and number of straight sinuses present [2]. Functionally, it serves as a significant site of venous drainage for the vein of Galen, inferior sagittal sinus, and cerebellum [2-5]. In this report, we present a rare case of a nearly vertical straight sinus, in a patient with hydrocephalus and Chiari I malformation. 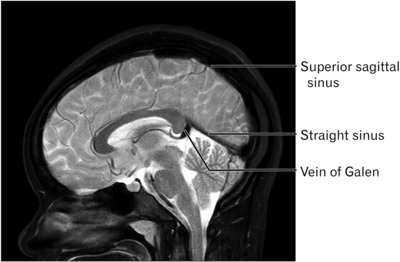 A 3-year-old male presented to our clinic with a history of irritability and complaints of headache. Physical examination was within normal limits. The head circumference was in in the 75th percentile for age and the child was making developmental milestones. There was no papilledema. Magnetic resonance imaging (MRI) identified ventriculomegaly and a Chiari I malformation (Fig. 2). Additionally, a nearly vertically positioned (approximately 75–80 degrees) straight sinus and a well developed inferior sagittal sinus (Fig. 2). The straight sinus was more or less the same diameter of the superior sagittal sinus. The straight sinus received its normal tributaries such as the vein of Galen. No other pathological processes were identified in this patient. The patient was scheduled for posterior cranial fossa decompression as a treatment of the Chiari I malformation. 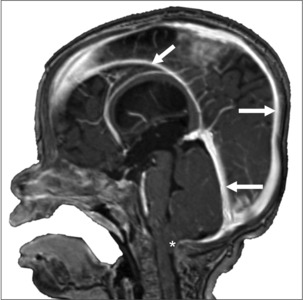 Embryologically, the development of the straight sinus correlates with the growth of the dura mater [1, 5]. It forms at the ventral region of the sagittal plexus and can be first identified when the embryo reaches 50 mm [1]. The straight sinus is located underneath the splenium of the corpus callosum, where it proceeds posteriorly and inferiorly towards the point of intersection between the midline of the tentorium cerebelli and the falx cerebelli [2, 6]. It eventually joins with the superior sagittal sinus and transverse sinus to form the torcular Herophili [6].

Several studies have studied the anatomy of the straight sinus. In an examination of 43 cadavers, Saxena et al. [7, 8] observed the straight sinus to have a length between 4 to 7 cm and width between 2 to 5 mm [2]. It was also noted that 13.95% of the cadavers had a doubled straight sinus, with 9.3% in the median position (superior and inferior), and 4.7% in the paramedian position (side by side) [2, 7, 8]. Furthermore, Mağden [10] reported two cases of a triple straight sinus, and Knott [11] described a case of an absent straight sinus [2]. While absence of a straight sinus is uncommon, Ryu [12] observed a significantly higher incidence among individuals with a persistent falcine sinus, which is usually seen within the falx cerebri in the fetus that drains the deep cerebral venous system to the superior sagittal sinus.

Additionally, age-related variations in the angulation of the sinus have been described. In adults, the tentorial angle typically ranges between 27 to 52 degrees [2, 9]. Our case was found to have a straight sinus with an angulation of about 80 degrees. Hasegawa et al. [13] have made efforts to categorize these variations based on their relationship with the corpus callosum [2]. After examining 108 cases, they found that 63% could be classified as type 1, where there was a tangential relationship between the extended line of the straight sinus and the splenium of the corpus callosum [2, 13]. The rest of the cases were then classified as being either greater (26%) or lower angles (11%) [2, 13].

In the present case, the patient has been diagnosed with a Chiari I malformation. Chiari I malformations have herniation of the cerebellar tonsils below the foramen magnum, often thought to be due to a smaller than normal posterior cranial fossa such as seen in our patient [14]. It has been hypothesized that the restriction reduces the space available for CSF, which contributes to increased intracranial pressure [14].

MRI examinations conducted by el Gammal et al. [15] evaluated 20 patients with Chiari II and III malformations. They were able to identify vertically oriented straight sinuses in four patients with Chiari II malformation, who also displayed an abnormally high apex of the tentorium cerebelli [15]. Similar to our case, every patient that participated in the study also displayed enlarged ventricles [15]. However, a vertically oriented straight sinus is not part of the findings typical of a Chiari I malformation or age-related. Further studies are needed.

The authors wish to thank the individuals who donated their bodies for the advancement of education and research.