An unusual finding of the pectoralis major muscle: decussation of sternal fibers across the midline

Variations of the pectoralis major muscle are commonly seen. However, during the routine dissection of an adult male cadaver, an apparently uncommon muscular variant was identified. In this cadaver, the sternal heads of the left and right pectoralis muscles crossed the midline and interdigitated with one another. In addition, the clavicular heads of both pectoralis major muscles were separated from the remaining parts of the muscles. Such anatomical variants such be kept in mind by clinicians and surgeons during patient evaluation and treatment.

The pectoralis major is composed of three heads: a clavicular head originating from the anterior border of the medial clavicle, a sternocostal head originating from the anterior surface of the sternum and second-sixth costal cartilages, and an abdominal head originating from the aponeurosis of the external oblique [1]. These three heads insert together as the pectoralis major tendon in the bicipital groove. Variations to this general organization are common, occurring six times more frequently than any other muscle or muscle group in the body [1, 2]. Herein, we present a case with bilaterally separated clavicular heads and sternal fibers that decussate across the midline. Variation in the degree of separation between the left and right sternocostal heads as well as interdigitation of the fibers has been described, but complete decussation remains rare [1, 2]. Many muscles surrounding the pectoralis major are capable of compensation, so anatomical variations usually produce only minor functional deficits, if they manifest clinically at all [3, 4]. However, awareness of potential variation has important surgical implications for flap reconstructions, breast surgeries, and other chest wall operations.

During the routine dissection of an elderly adult male aged 92 years at death, two unusual findings involving the pectoralis major muscles were noted. First, the upper fibers of the sternal heads of the left and right pectoralis major muscles decussated across the sternum to join the muscle fibers of the contralateral pectorialis major muscle (Fig. 1). These decussating fibers crossed primarily over the manubrium of the sternum and began just inferior to the sternal attachment of the sternocleidomastoid muscles. Inferior to this unusual decussation, the remainder of the sternocostal heads of the left and right pectoralis major attached ipsilaterally in normal fashion. Secondly, the clavicular parts of the left and right pectorialis major muscles were separated from the remaining parts of these muscles and only united laterally at the insertion of the muscles (Fig. 1). The gap between the clavicular and sternal heads was filled with normal adipose tissues. Both pectoralis muscles and all of their parts were innervated by the medial and lateral pectoral nerves. No other anatomical variations were noted in this specimen. 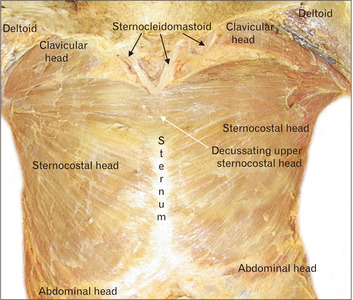 Figure 1. Anterior view of the specimen described in the present report. Note the bilaterally separated clavicular heads of the pectoralis major muscle. Also, the sternocostl fibers are seen decussating across the midline over the sternum.

Unsurprisingly, with a wide range of morphological variation comes a wide range of clinical presentations. Patients with atypical pectoralis major musculature usually do not notice any functional deficits [3-5]. A study by Lee and Chun [5] in 1991 found some decrease in peak torque and horizontal adduction power in the setting of congenital absence of the pectoralis major, but aside from difficulty with specific actions like throwing and climbing the patient was not significantly affected. Atypical insertions of the pectoralis major and presence of certain accessory muscles, especially those in the axillary region, can potentially entrap the nearby axillary artery or branches of the brachial plexus [3, 6, 9]. Often the symptoms of this kind of neurovascular entrapment resemble thoracic outlet syndrome [3].

Structural effects of pectoralis major variations do not always manifest clinically. Dissections by Soni et al. [10] and Venieratos et al. [3] demonstrated that fusion of the clavicular head with the deltoid may displace the cephalic vein superficially or abort it altogether, presumably without significant symptoms during the patient’s life. In cases of atypical musculature, patterns of innervation are generally conserved, although of course independently formed variations of innervation have been documented [4, 11]. In addition to their local associations, pectoralis major variations are correlated with greater incidence of skull anomalies, adrenal anomalies, and anencephaly [12].

Knowledge of anatomy and possible variations is critical to successful chest wall surgeries, especially breast augmentations or reconstructions and pectoralis major flaps [3, 13, 14]. In breast augmentations or reconstructions, accessory musculature can shift the pocket for the implant, prolong tissue expansion, or lead to excess scarring unless the surgical plan is adjusted accordingly [6]. If the pectoralis major is entirely absent it can prevent successful implant placement altogether [3]. In flap surgeries, the pectoralis major has been used locally for coverage of postoperative sternal wound infections and mediastinal wounds, and in head and neck surgery for oromandibular and pharyngoesophageal reconstructions [3]. Awareness of the anatomy of the pectoral region in its many forms is critical to the creation and placement of a successful flap.

Although pectoralis major variations are not usually detected on imaging, anatomical abnormalities may present a challenge for radiologists [6]. In the event that a muscular variation does produce symptoms, it can be difficult to differentiate baseline atypical anatomy from a soft tissue tumor [3]. Even determining the presence or absence of an accessory muscle can be problematic, for example, studies assessing sternalis muscle prevalence using various imaging modalities have reported anywhere from a 0.018% prevalence (mammography, n=105,860 specimens) to a 10.5% prevalence (computed tomography, n=1,896 specimens) [2, 7, 8].

In conclusion, as many detailed descriptions focused on the variations of the human muscles have not mentioned interdigitating fibers between the left and right pectoralis major muscles [15], we believe our cadaveric finding is very uncommon as we could not find any previous literature. However, such variants such be kept in mind by clinicians and surgeons during patient evaluation and treatment.

The authors wish to thank the individuals who donated their bodies for the advancement of education and research.