Major bleeding associated with sagittal split ramus osteotomy (SSRO) involves vessels such as the inferior alveolar, facial, and maxillary arteries and veins, and the retromandibular vein (RMV). The present study aimed to clarify and classify the three-dimensional variations in RMV position and course direction in relation to the mandible. Specimens comprised a total of 15 scientific cadavers, and the relationship between RMV and the mandible lateral and posterior views was observed. We identified 3 patterns on the lateral view, the mean distance between the RMV and the posterior border of the ramus was 3.9 mm at the height of the lingula. A total of five course patterns were identified on the posterior view. In no course pattern, the RMV inferior to the lingula was lateral to its position superior to the lingual. The present findings suggest that it may be possible to predict correlations with intraoperative bleeding risk. Further study is planned using contrast computed tomography in patients with jaw deformity for skeletal classification.

With the recent development of ultrasonic scalpels and other surgical instruments, and improvements in surgical procedures leading to increased safety, orthognathic surgery is now a widely performed, important specialization within oral and maxillofacial surgery. Diverse surgical approaches are available to meet patients’ varied needs regarding functional and cosmetic issues. A nationwide survey on orthognathic treatment in Japan found that approximately 70% of orthognathic surgeries are sagittal split ramus osteotomy (SSRO) [1]. Similarly, SSRO represents the majority of mandibular osteotomies performed at our institution [2].

Intraoperative risks associated with SSRO include unfavorable fracture, inferior alveolar and lingual nerve damage, and major bleeding. Major bleeding involves vessels such as the inferior alveolar, facial, and maxillary arteries and veins, and the retromandibular vein (RMV), and is related to surgical approach [3]. According to Sahoo et al. [4], comparatively few instances of major bleeding in SSRO involve the inferior alveolar and maxillary arteries and veins [5]. Instead, the usual culprit is injury to the various vascular branches running along the medial surface and posterior border of the mandibular ramus. This suggests a greater risk of bleeding when the RMV is adjacent to the posterior border of the ramus or branches are present at the position of the medial cut.

After forming through the joining of the superficial temporal and maxillary veins, the RMV descends posterior to the posterior border of the ramus and then drains into the internal jugular vein [6]. The RMV has no accompanying artery of the same name; however, as the majority of the venous blood in the maxillofacial area flows through the RMV, its importance is undeniable. Touré and Vacher [7] studied cadavers to investigate the positional relationship in the courses of the RMV and facial nerve in the region of the parotid gland and identified six patterns. Furthermore, investigation of the vessels and nerves in the parotid space led Babademez et al. [8] to conclude that the positional relationship between the courses of the RMV and facial nerve is a risk factor for facial nerve palsy that requires particular vigilance during parotidectomy.

Conversely, few studies have focused on RMV position, course pattern, and other factors in the context of surgical procedures, including SSRO, that involve surgical manipulation at the posterior border of the ramus. There is particular need for basic data regarding the three-dimensional (3D) position of the blood vessels in relation to the mandible in order to increase prediction accuracy regarding the bleeding risk in orthognathic and other oral surgeries.

The present study aimed to clarify and classify the 3D variations in RMV position and course direction in relation to the mandible, and identify the unique characteristics of the RMV with its lack of accompanying artery within the surrounding tissue.

Specimens comprised a total of 15 scientific cadavers (10 male, 5 female; mean age [range], 84.9 [68–102] years) from the collection at the Department of Anatomy, Tokyo Dental College that had been fixed in 10% formalin and preserved in 70% ethanol. The present study was approved by the Ethics Committee of Tokyo Dental College (Ethics Approval No. 781).

First, the platysma muscle was detached from the mandible and reflected and the presence of structures including the superficial temporal and facial veins was confirmed. Next, the surrounding connective tissues were carefully resected together with the parotid gland. An incision was made in the center of the sternocleidomastoid muscle belly to expose the internal jugular vein. Subsequently, the digastric muscle was exposed and the intermediate tendon incised to expose the junction of the internal jugular vein and RMV. At this point, photographs were taken from a lateral and posterior view to record the positional relationship between the RMV and the ramus and the position of the mandibular lingula. A portion of the ramus was then incised and resected and the maxillary vein and pterygoid venous plexus were exposed. Lateral and posterior views were photographed again.

After identifying the junction of the superficial temporal and maxillary veins, the presence of the RMV running along the posterior border of the ramus and of the external jugular vein branching off posteriorly midway were identified. Next, the pre- and post-resection photographs of the ramus were superimposed to clarify the positional relationship between the RMV and mandible. On the lateral view, the distances from the posterior border of the ramus to the RMV, the external jugular vein, and the mandibular foramen were measured at the height of the lingula, which forms the reference for the vertical height of the medial cut in SSRO (Fig. 1A). A baseline was created based on Loukota et al.’s classifications [9] of condylar process fractures (Strasbourg Osteosynthesis Research Group Classification) and vertical lines were established; one passing through the lowest point of the mandibular notch and one through the lingula.

On the posterior view, images were divided into three buccolingual sections comprising the posterior border and buccal and lingual aspects of the ramus. These were then each divided into superior and inferior sections at the height of the lingula. Based on these sections, RMV course patterns were classified into one of nine possible categories (Fig. 1C).

The RMV and the superior temporal vein (STV) ran posteriorly to the mandibular ramus. The former was located anterior to the latter, which directly connected to the external jugular vein. This pattern was 86.7%. On the other hand, we also found another pattern (13.3%). The RMV was located posterior to the mandibular ramus. The superior (inferior) part of the RMV was continuous with the STV (the internal jugular vein). The superficial temporal vein was not connected to external temporal vein (Fig. 2, Table 1). 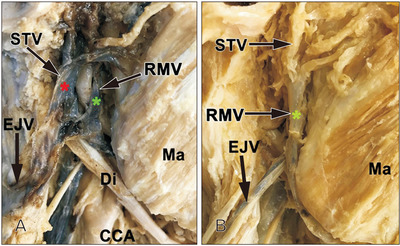 Measurements on the lateral view 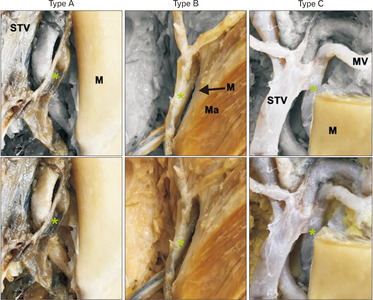 Course patterns on the posterior view

Pattern II (B-1): diagonal course running medially from immediately posterior to the posterior border of the ramus, n=3 (20.0%).

Pattern III (B-2): rectilinear course running immediately posterior to the posterior border of the ramus, n=2 (13.3%).

Pattern IV (C-1): diagonal course running from lateral to medial in relation to the posterior border of the ramus, n= 2 (13.3%).

Pattern V (C-2): diagonal course running from lateral to immediately posterior in relation to the posterior border of the ramus, n=1 (6.7%).

No significant differences were observed between male and female for all data items.

Widely recognized for its treatment efficacy, orthognathic surgery has come to have an important place in the field of oral and maxillofacial surgery in Japan. With advances in treatment techniques and surgical instruments, it is now a standard surgery in the field and widely performed as its safety continues to increase. The most common type of orthognathic surgery is SSRO [1, 2].

The first surgical approach for SSRO was reported by Trauner and Obwegeser [10] in 1957; however, subsequent reports of complications including aseptic necrosis and nonunion of the bone segments led to various procedural modifications involving alterations to the line of incision [11-13]. Intraoperative complications such as major bleeding, lower lip paraesthesia, and unfavorable fracture are frequently encountered [3, 14-16]. Pineiro et al. [17] reported a correlation between surgical time and intraoperative blood loss with SSRO. Thorough preoperative evaluation of surgical risks is important to reduce surgical time and intraoperative blood loss and achieve a favorable outcome. The incidence of unfavorable fracture and inferior alveolar nerve damage can be reduced using preoperative computed tomography (CT). However, as many vessels run through the soft tissue, intraoperative bleeding cannot be preoperatively predicted without contrast CT. With reported incidences in SSRO of 11.4% (5/74) [4] and 2.0% (5/301) [18], major bleeding is an intraoperative complication that will be encountered in a certain percentage of cases. In a previous study conducted at our institution, the average blood loss during SSRO was 160 g and the maximum blood loss was 1,400 g [2]. Major bleeding was caused by inside mandibular ramus blood vessel damage [2]. The desire to avoid complications of allogeneic transfusion due to major intraoperative bleeding in the pursuit of safer orthognathic surgery has spurred various investigations into blood loss reduction. However, the majority of these studies discuss only general anesthesia management or hemostatic agent administration [19, 20].

The present study measured RMV position and course patterns in relation to the posterior border of the ramus using cadavers in order to facilitate preoperative evaluation of the bleeding risk in SSRO.

No specimens presented a pattern involving the RMV running laterally to the ramus inferior to the lingula, which is the position of the lateral cut in Trauner’s method [10]. However, there were some anomalous specimens that diverged from the mean. These were variciform structures with the varicosity positioned at the junction between the RMV and external jugular vein, which was consistent with the position of the lateral cut in Trauner’s method [10]. These types of anomaly pose a potential risk for intraoperative bleeding. Furthermore, the reportedly high incidence of vascular variants in patients with jaw deformity [16, 21] necessitates extra care during orthognathic surgery, regardless of the particular approach.

In addition, in cases of mandibular prognathism with a large degree of displacement for which a long split is used for the medial cut during osteotomy, the distal bone segment may be positioned posterior to the posterior border of the ramus during mandibular fixation. In the present study, not only was the RMV adjacent to the posterior border of the ramus at the height of the lingula in some cases, the minimum rectilinear distance between the lingula and the posterior border of the ramus was 9.1 mm. These findings indicate the need to preoperatively consider whether a short split should be used for the medial cut in cases with a large posterior displacement. Giving comprehensive consideration to medial periosteal elevation and cut and bone segment displacement with mandibular setback in SSRO, the present findings suggest that the highest bleeding risk is associated with Type A (Specimen No. 9, 10, and 13) in Patterns III and V.

Aside from orthognathic surgery, RMV position and course pattern are also important in surgeries such as open reduction and internal fixation of condylar process fractures. The condylar process can be approached from various directions, including the intraoral region, submandibular region, and posterior border of the ramus; however, the course of the RMV as well as the path of the facial nerve are extremely important during surgery, particularly when using the Risdon [22, 23] or retromandibular [24, 25] approach. Thus, the present findings suggest novel possibilities for evaluating bleeding risk in surgeries involving manipulation of the posterior border of the ramus, including SSRO.

In conclusion, the present study identified three types of positional relationship between the RMV and the posterior border of the ramus and five RMV course patterns. Combining these findings enabled measurement values to be obtained regarding the anatomical morphology important for SSRO. The findings suggest it may be possible to predict correlations with intraoperative bleeding risk.

Further study is planned using contrast CT in patients with jaw deformity for skeletal classification and to investigate RMV position and course patterns to obtain measurements of more practical surgical use.

We would like to thank Dr. Manami Michiwaki and Dr. Kento Odaka for analysis of imaging data.