The pathogenesis of Chiari 1 malformations has been explained in several different ways, but extensive evidence suggests a relationship between loss of volume within the posterior cranial fossa and Chiari 1 presentations. It is important to be able to differentiate Chiari 1.5 from Chiari 1 malformations as they have similar clinical presentations, but the latter have progressed further and are characterized by caudal herniations of the brain stem through the foramen magnum. Despite the similarities of presentation, Chiari 1.5 malformations have greater rates of complications following posterior decompression surgeries, which are typically performed to relieve ventral compression. An improved understanding of the odontoid synchondroses could lead to better understanding of Chiari malformations and lead to improved treatment of patients with these presentations. Here we present a rare case of an accessory odontoid synchondrosis in a patient with a Chiari 1.5 malformation and ventral compression.

The odontoid synchondroses are cartilaginous articulations separating the odontoid process from the body of the axis (Fig. 1) [1]. They normally become fully fused between the ages of five and seven years, usually forming a line on radiographs until 11 years; so most cases involving fracture of the synchondrosis are in children [1-3]. In this report, we present a rare case of an accessory odontoid synchondrosis in a patient with a Chiari 1.5 malformation and ventral compression. 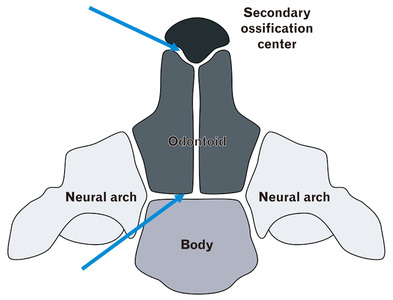 Figure 1. Schematic drawing of the ossification centers and synchondroses (arrows) of the C2 vertebra.

A 13-year-old boy presented with diplopia and occasional headaches. The symptoms were ongoing for three months and were more pronounced in upon wakening in the morning. There was no past surgical or medical history. On examination, a left abducens nerve palsy was identified and his gag reflex was absent. The remainder of his motor and sensory exams were normal as was his cerebellar and deep tendon reflex exams. Magnetic resonance imaging (MRI) revealed a Chiari 1.5 malformation without syringomyelia (Fig. 2). Additionally, ventral compression (8 mm) of the anterior brainstem was noted. There was no hydrocephalus. An additional synchondrosis of the odontoid process, superior to the normal subdental synchondrosis, was identified (Fig. 2). This synchondrosis was located at the midportion of the odontoid process inferior to where the apical synchondrosis would have been located and gave the odontoid process and elongated appearance. A posterior fossa decompression procedure was offered but was declined by the family. 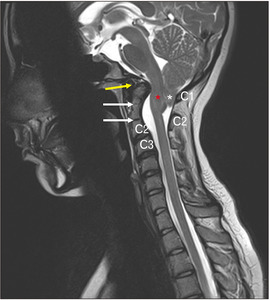 Figure 2. Two odontoid synchondroses in the same C2 vertebra (white arrows) shown in a midsagittal magnetic resonance imaging image. The upper white arrow notes the accessory synchondrosis. Note the cerebellar tonsils (asterisk), and the lower part of the brainstem (red star) located below the foramen magnum i.e., Chiari 1.5 malformation. The anterior arch of the atlas (yellow arrow) is not ossified. The posterior arch of C1 and spinous process of C2 are also shown.

Many different explanations of the pathogenesis of Chiari malformations have been proposed, but because a wide variety of anomalies can arise, no definitive account has yet been agreed [10]. Nevertheless, extensive evidence demonstrates that reduction of the posterior cranial fossa volume contributes to hindbrain herniation and the development of a Chiari 1 malformation in many cases [11, 12]. Such decreases in volume have been associated with developmental abnormalities disrupting the rotation of the tentorium cerebelli and petrous bone during the embryonic, fetal, and postnatal periods, leading to an overcrowded posterior cranial fossa [11]. Although ventral compression can be seen in patients with Chiari 1.5 malformation, commonly associated vertebral variations include atlanto-occipital fusion and Klippel-Feil syndrome and not an accessory synchondrosis of the odontoid process as seen in the present case (Fig. 2).

Furthermore, there is a high incidence of craniovertebral junction (CVJ) abnormalities among the Chiari 1 malformation population. Many hypotheses have linked the development and migration of the odontoid process, axis, and clivus to shrinkage of the posterior cranial fossa, exacerbating the conditions and causing further tonsillar herniation [5, 13]. Studies of pediatric populations have revealed a correlation between retroflexion of the odontoid process and the presence of a Chiari 1 malformation or other skeletal disorder with CVJ abnormalities [1, 14, 15]. In fact, excessive retroflexion of the odontoid process has been classed as a causative agent of ventral compression among Chiari 1 patients and this was seen in the present case [15]. Currently, it is standard protocol to perform a posterior decompression on Chiari 1 patients exhibiting ventral compression [15]. In view of the differing surgical outcomes between Chiari 1 and 1.5 patients, it is essential for physicians to distinguish between them and consider their variable anatomy [6, 7, 9, 15].

Although variations and pathology such as atlanto-occipital fusion and Klippel-Feil syndrome have been reported in a patient with a Chiari 1.5, to our knowledge, an accessory synchondrosis of the odontoid process with a Chiari 1.5 malformation has not been described in the literature. Owing to the lack of available information, the clinical implications of a duplicated odontoid synchondrosis are still unclear, and it is difficult to be certain that a concomitant Chiari malformation contributes to its development. Elucidating this mechanism could give greater insight into the pathogenesis of Chiari malformations and provide us with a more comprehensive plan for diagnosing and treating patients with these presentations. Since there are differences between the surgical outcomes of Chiari 1 and 1.5 malformation patients, differentiating the two is imperative for ensuring the greatest patient benefit.