Meissner’ corpuscles are tactile corpuscles located in the dermal papillae of hairless skin, and are generally believed to be distributed in the fingertips, toe tips, palms, soles, lips, eyelids, nipples, and genital organs. A Meissner’s corpuscle is egg-shaped, with an 80-μm-long axis perpendicular to the skin surface and a width of about 40 μm. The corpuscle consists of flattened supportive cells, Schwann cells, laid horizontally and forming lamellar discs, a distinct feature of the Meissner’s corpuscle. Each corpuscle is surrounded by a connective tissue capsule. Myelinated nerve fibers enter and branch into unmyelinated nerve fibers between the cells [1, 2]. The external capsule is linked to both the lamellar discs and epidermis via collagen fibers [3].

Meissner’s corpuscles are very sensitive, rapidly adapting mechanoreceptors that are mainly responsible for two-point discrimination. Some reports suggest that they also function to detect light touch [4, 5], which may be associated with their distribution in sensitive areas of the lips, eyelids, nipples, and genital organs.

Meissner discovered tactile corpuscles in 1853, and researchers have subsequently studied their structure and distribution. The development of electron microscopy revealed the microscopic structure of Meissner’s corpuscles. However, their distribution remains unclear [6-8].

Tissues were obtained from the fingertips, palms, lips, nipples, and labia majora and minora of five cadavers donated for medical research and education to the Department of Anatomy, College of Medicine, Chungnam National University, Korea. All five were women, and the average age was 67.3 years (range, 53-75 years).

Using a scalpel and scissors, tissue from the body was dissected into 1-cm2 pieces including the epidermis and dermis. The samples were post-fixed for 1 day in 10% formalin and then embedded in paraffin in the vertical direction relative to the skin. Beginning where both the epidermis and dermis appeared, they were sectioned continuously to a thickness of 5 μm, with up to 400 sequential sections from each specimen. Hematoxylin–eosin staining was performed on the tissue slides.

Table 1 . The number of Meissner’s corpuscles in various skin tissue 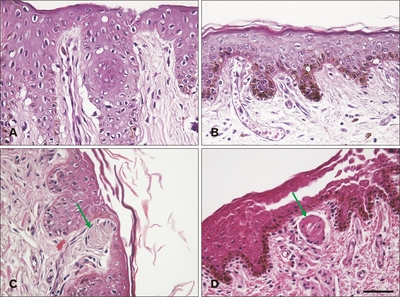 This work was supported by research fund of Chungnam National University.

We thank Min Geun Chee, Sa Deok Hong, and Soo Min Kim for observing Meissner’s corpuscles in many tissue slides for our study.