Anomalies of the peritoneum and the colon are quite common. Some of these anomalies can disturb the normal digestive and absorptive functions of the intestine and the others might result in formation of volvulus or impede the blood supply of the intestine. We report a rare, combined variation of peritoneum and ascending colon. In a 70-year-old male cadaver, the greater omentum was very small and extended only for about an inch below the transverse colon. From its lower end, a fibrous band extended to the right wall of the upper part of ascending colon. There was a deep constriction on the right wall of the ascending colon at the site of attachment of the fibrous band. The ascending colon was grossly dilated. Further, the ascending colon was mobile and presented a small ascending mesocolon along its left edge. We discuss the possible embryological basis and clinical and surgical relevance of the case.

Peritoneum is a serous membrane that lines the abdominal cavity. One of its main functions is to protect the visceral organs. The peritoneal folds like greater omentum contain aggregation of lymphocytes and macrophages for this purpose. Some of its folds help in the movements of the viscera and others help in transmission of blood vessels, lymphatics and nerves to the viscera. Some of the peritoneal folds/bands that have been reported are formed during foetal life and a few others due to pathological processes of the abdomen. Anomalous peritoneal folds are common in the upper abdomen, specifically near the gall bladder. Some of the reported peritoneal folds include cystogastric fold [1], Cystogastrocolic fold [2], omentocystic fold [3], and cysto-duodenocolic fold [4]. Nayak [5], has reported an anomalous peritoneal fold connecting the greater omentum with the liver, gallbladder, right kidney and lesser omentum. Most of these folds might go unnoticed during lifetime. Some of them may be found during surgery of abdomen or at autopsy. We report an unusual peritoneal band connecting lesser omentum with the ascending colon. The case could be surgically and functionally important. 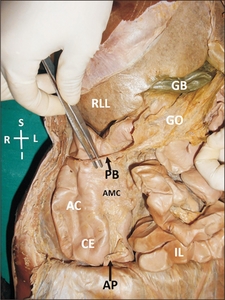 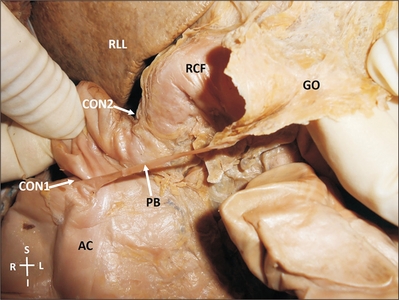 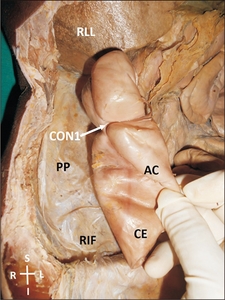 Anomalous peritoneal folds of peritoneum result due to some abnormal events taking place during embryonic development of the gut. They may extend abnormally from one viscera to another or from viscera to the abdominal wall. These peritoneal folds, sometimes are very narrow like fibrous cords which extend from intestine to the anterior abdominal wall. The commonest among them is called Ladd’s band, which extends from the caecum to anterior abdominal wall [6]. Such bands are known to cause intestinal obstructions. Acute abdomen caused by a omental band [7], duodenal obstruction [8] and proximal jejunal obstruction [9] have been reported. Akgür et al. [10] studied 8 patients, among the 8 patients studied, abnormal bands were located between ascending colon and terminal ileum in 50.0% (4 patients), between Treitz ligament and terminal part of ileum in 25.0% (2 patients), between liver and terminal ileum in 12.5% (1 patient), and between liver and ascending in 12.5% (1 patient) of patients. Further, these bands had caused obstruction or compression of bowel in 62.5% patients and entrapment of a part of intestine in 37.5% of cases. Bands containing lose connective tissue and blood vessels, causing small bowel obstruction have been reported by Sozen et al. [11].

The anomalous band being reported here, could be of a congenital origin. Normally the foregut possesses a ventral and a dorsal mesentery during early development. Later on the ventral mesentery forms falciform ligament of liver and the lesser omentum, whilst the dorsal mesentery gives rise to gastrophrenic ligament, gastrosplenic ligament and lienorenal ligament. The midgut also possesses a dorsal mesentery and is mobile during 6th week of intrauterine life. It herniates into the umbilical cord through a process called ‘physiological umbilical hernia’. The part of the intestine derived from midgut, rotates through 270 degrees in anticlockwise direction (90 degrees during herniation and 180 degrees during return). Once the intestine is back to the abdominal cavity, the organs get reorganised according to their final position. The ascending colon loses its mesentery through a process called ‘zygosis’. In the current case, the greater omentum would have got attached to the ascending colon during embryonic development and the constant pull by the narrow band that connected greater omentum to the ascending colon would have restricted the ascending colon from falling to its right and losing its mesentery. This is the possible reason for the extension of the right lateral paracolic gutter behind the ascending colon too. The constriction of the ascending colon could also be due to the pull and pressure rendered by the peritoneal band which crossed it from front and got attached to the right wall of the colon. It is obvious that the dilation of the ascending colon below this level was due to the constriction produced by the pressure of the ligament. We do not have the premortal history of the cadaver. So we are not able to describe any problems like constipation that he would have had during life. This types of bands could result in this kind of constriction, compression and obstruction of the intestine at some part of life.

In conclusion, the anomalous peritoneal band that we are reporting is a very rare variation of the peritoneum. It would have developed during embryonic development and it could compress the intestine leading to its obstruction. The knowledge of this peritoneal band could be of great importance to radiologists, surgeons and other healthcare practitioners.