Identification of most consistent and reliable anatomical landmark to locate and protect radial nerve during posterior approach to humerus: a cadaveric study

The location of the radial nerve (RN) is described with various bony landmarks, but such may be disturbed in the setting of fracture and dislocation of bone. Alternative soft tissue landmarks would be helpful to locate the nerve in such setting. To recognize certain anatomic landmarks to identify, locate and protect RN from any iatrogenic injury during surgical intervention such as open reduction and internal fixation. Forty arms belonging to 20 adult cadavers were used for this study. We measured the distance of RN from the point of confluence of triceps aponeurosis (TA), tip of the acromion and tip of the lateral epicondyle along the long axis of the humerus. These distances were correlated with the upper arm length (UAL). The average UAL was 32.64±0.64 cm. The distance of the RN from the point of confluence of TA (tricepso-radial distance, TRD), tip of acromion (acromion-radial distance) and tip of lateral epicondyle of humerus (condylo-radial distance, CRD) was 3.59±0.16 cm, 14.27±0.59 cm, and 17.14±1.29 cm respectively. No correlation was found with UAL. Statistically, TRD showed the least variability and CRD showed maximum variability. The minimum TRD was found to be 3.00 cm. So this should be considered as the maximum permissible length of the triceps split. The point of confluence of the TA appears to be the most stable and reliable anatomic landmark for localization of the RN during the posterior approach to the humerus.

The radial nerve (RN) arises from the posterior cord of the brachial plexus. The nerve crosses the spiral groove obliquely from medial to lateral over the posterior surface of the humerus. It then penetrates the lateral intramuscular septum near the junction of the middle and distal thirds of the humerus [1, 2]. The long tortuous course and close relation to the periosteum of humerus make RN most common peripheral nerve involved in upper extremity fracture [3]. RN palsies are mainly two types, Primary and secondary. Primary palsies are those mostly due to fracture humeral shaft and have been reported in 11.8% of all cases reported [4]. Secondary or iatrogenic palsies can occur during any kind of operative interventions for unstable humeral fractures, such as plating or open reduction and internal fixation. These iatrogenic palsies are not uncommon in routine practices and are of major concern [5] before planning intervention. Fracture humerus can be fixed through various surgical approaches, such as anterior, anterolateral, posterior, modified posterior [6]. Although RN is at considerable risk in each of these approaches [7], posterior approach is considered to be the safest. So identification of the RN during posterior approach allows us to protect it during surgery and further aids in its localization in future revision surgery [8]. Some studies have established the anatomic relationship of the RN with various bony landmarks, such as medial epicondyle, lateral epicondyle of humerus and tip of the acromion [9-13]. Previously orthopaedic surgeons used to depend on these landmarks to identify the RN during surgical exploration of the humerus but the wide range of these proposed anatomic relationships may create difficulty to localize the RN during surgery. Moreover, such relationships with bony landmarks may not hold true in clinical settings, especially with fractures of the distal third of the humerus [14]. Therefore, we believe that surgeons need another consistent and reliable anatomic landmark to locate the RN more precisely during the ‘triceps splitting’ approach to the humerus.

With such a facile, the primary aim of our study was to measure the distance of the RN from the point of confluence of the triceps aponeurosis (TA) (soft tissue landmark), tip of acromion and tip of lateral epicondyle of humerus to locate the RN. Secondary aim was to define the most consistent and reliable anatomical landmark for intra operative identification of RN.

The present study was done on 40 upper limbs belonging to 20 formalin embalmed cadavers (15 male, 5 female) aged between 45 to 60 years. Arms having any gross malformation or deformity were excluded from the study.The specimens were prepared through scapula-thoracic disarticulation and mid clavicular amputation. Each cadaveric upper extremity was placed at 90 degree flexion at elbow joint as this is the most common position used intraoperatively. A posterior midline skin incision starting from the tip of acromion up to the tip of subcutaneous olecranon was given. Subcutaneous tissue and deep fascia were also incised in the same line exposing the triceps muscle. The shiny TA was immediately visible on the posterior arm. The long and lateral heads of the triceps muscle converged and fused to form this aponeurosis, which inserted into the posterior rough area of subcutaneous olecranon. The point of intersection (A) between the intramuscular septum with the TA was identified and labelled as ‘point of confluence’ (Fig. 1). Triceps splitting was done along the line of intramuscular septum to separate the long head from lateral head at the level two finger breadths proximal to the point of confluence. The point of intersection between RN within the spiral groove and mid axial humeral line was identified and marked as point ‘B’. The distance between the point of confluence of TA (A) and the RN (point B) was measured and recorded as tricepso-radial distance (TRD) (Fig. 2). Furthermore, TA was also split to give better exposure for RN identification. RN was seen overlying the periosteum of the humerus within the spiral groove (Fig. 3). The distance of the RN from two bony landmarks, such as tip of acromion and tip of lateral epicondyle of humerus was also measured and recorded as acromio-radial distance (ARD) and condylo-radial distance (CRD) respectively. Measurements were taken with the help of surgical ruler. The distance from the tip of acromion to the tip of the lateral epicondyle of humerus was also measured and recorded as upper arm length (UAL). UAL represented the humeral length. Correlation analysis was done between UAL and all the measured distances for each cadaveric specimen. 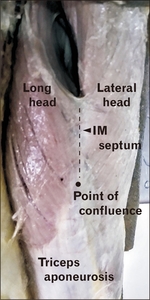 Figure 1. Showing the point of intersection between the intramuscular (IM) septum (dotted line) with the triceps aponeurosis, labelled as ‘point of confluence’. 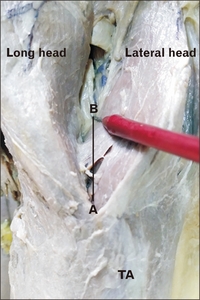 Figure 2. Showing the measurement of TRD distance between the point of confluence of TA (A) and the point of intersection of RN within spiral groove along the posterior aspect of the mid axial humerus (B). RN, radial nerve; TA, triceps aponeurosis; TRD, tricepso-radial distance.

Figure 3. Splitting of triceps aponeurosis for better exposure of radial nerve. The nerve can seen overlying the periosteum of the humerus and within the spiral groove.

Table 1 . Showing the values of the measured parameters. 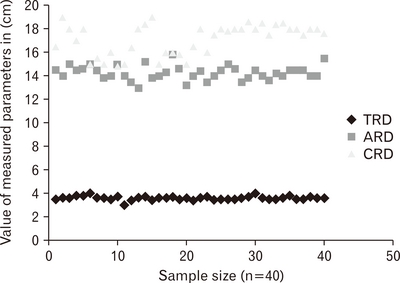 Knowledge of the location of the RN and its relationship with a consistent and reliable anatomic landmark, are major concerns for treating surgeons.

Several studies have been done on various ethnic populations to determine the relationship between RN and bony landmarks, few of them have taken tip of lateral epicondyle of humerus as fixed bony point as in our case.

Kamineni et al. [14] reported that the distance of the RN when it crosses the mid axial plane of humerus from the tip of lateral epicondyle of humerus was 1.4 to 2.0 times the trans epicondylar distance. On this basis, they proposed a ‘safe zone’ for external fixator pin entry into the lateral distal humerus.

All such studies observing relationships between RN and bony landmarks were conducted in cadaveric specimens having intact humerus; therefore, such anatomic relationships may not hold true in clinical situations. The relationships of the RN with various osseous landmarks did not have any correlative value, with wide inter-observer variability, and are difficult for surgeons to access intra operatively [8].

Based on cadaveric dissections, these studies show that the distance of the RN within the spiral groove from the tip of lateral epicondyle of humerus (CRD) ranges from 10 cm to 18 cm. Whereas the distance of the RN from the tip of the acromion (ARD) ranges from 14 cm to 17 cm. Considering the wide range of these proposed anatomic relationships, it may be difficult to localize the RN during the posterior approach to the humerus. Moreover, a surgeon is more interested in the relationship of the RN along the plane of surgical dissection (i.e., the intramuscular plane between the long and lateral head of triceps) rather than its relationship with the point where the RN enters or leaves the spiral groove. The exact localization of the RN using these bony points therefore seems to be questionable, and it may be imprudent for a surgeon to expect the existence of such relationships during operative fixation of fractures [18]. Therefore, in case of fracture and displacement of humerus, a non osseous superficial soft tissue landmark may guide the orthopaedician to identify the RN and prevent potential iatrogenic injury. There are few studies describing the relationship of the RN to soft tissue landmarks like the apex of the TA, triceps tendon and the point of confluence [8, 18-20]. Among these, the point of confluence is an easily distinguishable and constantly present superficial landmark.

In the present study conducted on 40 upper extremities, RN was consistently identified approximately two finger breadths proximal to the point of confluence with a mean of distance of 3.59±0.16 cm.

Seigerman et al. [8] conducted a similar study on 30 adult human cadaveric upper extremities and reported the RN to lie consistently at distance of 39.0±2.1 mm proximal to the point of confluence.

As evident from Table 1, the value of parameters of variability such as standard deviation, variance, 95% confidence interval of mean and Interquartile range were least for TRD. So, according to our findings, TRD can be considered the best measure to locate and protect the RN during surgery followed by ARD and CRD.

In conclusion, Soft tissue landmark (confluence of TA) is the most consistent and reliable to identify, locate and protect RN intraoperatively. The RN varies at different point within the spiral groove so it is always advised to take the shortest distance (TRD) as safe ‘triceps split’ by this way we can minimize the risk of nerve injury.